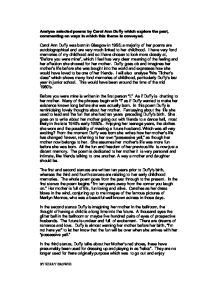 Analyse selected poems by Carol Ann Duffy which explore the past, commenting on ways in which this theme is conveyed. Carol Ann Duffy was born in Glasgow in 1955; a majority of her poems are autobiographical and are very much linked to her childhood. I have very fond memories of my childhood and so I have chosen to look more closely at, "Before you were mine", which I feel has very clear meaning of the feeling and her affection she showed for her mother. Duffy goes ob and imagines her mother's life before she was bought into the world and expresses how she would have loved to be one of her friends. I will also analyse "Mrs Tilcher's class" which shows many fond memories of childhood, particularly Duffy's last year in junior school. This would have been around the time of the mid 1960's. Before you were mine is written in the first person "I." As if Duffy is chatting to her mother. Many of the phrases begin with "I" as if Duffy wanted to make her existence known long before she was actually born. ...read more.

There are dreams of romance and love. Duffy is almost warning her mother before her birth, "I'm not here yet" to let her know that the fun will be over when she arrives with her "possessive yell." In the third stanza, Duffy talks about her Mother's red shoes, these have presumably been used for dressing up and playing in as "relics". They are no longer used for there originally purpose which was to go out and enjoy yourself. Though no longer since Duffy's arrival into the world. A powerful simile is used next "clear as scent" she can picture her mother "under the tree, with its lights". The memory is as dramatic as a well-known smell. In the fourth stanza "stamping the stars from the wrong pavement", this seems to mean that if her mother had taken a different path in life, who knows where she may have ended up. Carol Ann Duffy is full of fondness and respect for her mother. Since becoming a mother herself Duffy can really relay the sacrifices one has to make when taking on the task of parenthood. ...read more.

This would have soon been forgotten within the security of the classroom. She uses a simile here "Faded, like the faint, uneasy smudge of a mistake." By the time we reach the third stanza the mood has changed and innocence is beginning to disappear. This is when the realisation of the truth about growing up becomes apparent. "The inky tadpoles changed, from commas to exclamation marks." This could represent the shift from childhood to adolescence. "A rough boy told you how you were born." This is later confirmed as being true by Mrs Tilcher's avoidance to the answer when questioned "how you were born." She just smiles and turns away. In the final stanza there is a sense of need to be grown up, but a feeling of anxiety looms as Duffy is unsure of what the future holds. Feverish July is used as personification to describe the hot, sweaty mood of a teenager. There is impatience and touchiness with the rush of hormones and physical changes that are taking place in the change from childhood to adolescence. Having seen Carol Ann Duffy at Poetry live I thoroughly enjoyed both of these poems and can relate to many experiences described in them. I particularly enjoyed In Mrs Tichler's class as it bought back happy memories of junior school. BY KERRY BROWNE ...read more.