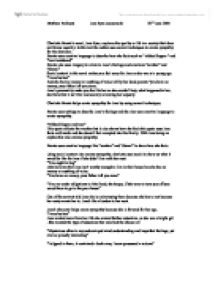 Charlotte Bronte's novel, Jane Eyre, explores the quality or life in a society that does not favour equality - In this text the author uses several techniques to create sympathy for the character.

Charlotte Bronte's novel, Jane Eyre, explores the quality or life in a society that does not favour equality. In this text the author uses several techniques to create sympathy for the character. Bronte uses emotive language to describe how she feels such as " nibbed fingers " and "heart saddened" Bronte also uses imagery to relate to Jane's feelings and emotions "sombre" and "dismal" Social context in this novel makes you feel sorry for Jane as she was at a young age "I was but ten" And she had no money or anything of value left by her dead parents "you have no money; your father left you none. Jane's personality make you feel for her as she couldn't help what happened to her, she feels that it isn't fair and society is treating her unjustly. Charlotte Bronte helps create sympathy for Jane by using several techniques. Bronte uses settings to describe Jane's feelings and she also uses emotive language to create sympathy. ...read more.

"I mounted on the window-seat; gathering up my feet, I sat crossed legged, like a Turk" This quote creates sympathy because the only time Jane isn't getting told of is when she is alone reading a book on a window ledge. The household view Jane as an out of control little girl. "She's like a mad cat" "She's and underhand little thing" This is because Jane has too much will and character and she wont break down Even though Jane was an older person in her mind she was still a little girl "I was but ten" Bronte creates a lot of sympathy for Jane by writing about her in the red room. The red room is terrifying for Jane as that room is where her uncle laid dead while people paid their respects. "Mr Reed had been dead nine years, it was wear he breathed his last breath" The red room to Jane means death as she lost both her parents and her uncle so death is Jane's worst fear the red room is like a mosque as her uncle laid dead there. ...read more.

The red room was a large dreamy room with a lot of bedroom items. The readers give Jane sympathy because she's young vulnerable and being orphaned, living with hr aunt, three cousins in a new house that makes it even worse. John the eldest of her cousins is a bully to Jane. He thinks that he is the man of the house and he owns it all but later in life he will. Her aunt didn't show Jane any affection, which showed that Jane was not wanted. Mrs Reed, Jane's aunt, sent Jane to boarding school to get rid of her. I feel sorry for Jane, as she hadn't had an easy life; she hasn't had a child hood. She had such a hard childhood as she's had no one to care for her or show any affection in the household and the opening two chapters give the reader a glimpse of the struggle Jane will have in adult life Matthew Fairhurst Jane Eyre coursework 18th June 2003 ...read more.