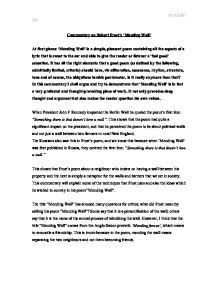 Commentary on Robert Frost's 'Mending Wall' At first glance 'Mending Wall' is a simple, pleasant poem containing all the aspects of a lyric that is sweet to the ear and able to give the reader or listener a 'feel good' sensation. It has all the right elements that a good poem (as defined by the following, admittedly limited, criteria) should have, viz alliteration, assonance, rhythm, structure, tone and of course, the ubiquitous iambic pentameter. Is it really anymore than that? In this commentary I shall argue and try to demonstrate that 'Mending Wall' is in fact a very profound and thought-provoking piece of work. It not only provokes deep thought and argument but also makes the reader question his own values. When President John F Kennedy inspected the Berlin Wall he quoted the poem's first line: "Something there is that doesn't love a wall". This shows that the poem had quite a significant impact on the president, and that he perceived the poem to be about political walls and not just a wall between two farmers in rural New England. The Russians also saw this in Frost's poem, and we know this because when 'Mending Wall' was first published in Russia, they omitted the first line: "Something there is that doesn't love a wall." ...read more.

There is also humour in the poem, which is shown in lines 18 and 19. These lines bring a light-heartedness tone to the poem, but the lines could also be perceived as sarcastic and mocking. Frost playfully suggests that they use a magic spell to balance the stones on the wall. "Oh, just another kind of outdoor game". This line makes the poem have a more conversational tone, the word 'oh' does this, but it is also a gap filler. The line may mean that Frost thinks that the wall is unnecessary and that him and his neighbour only build it to pass time, or maybe as an excuse to meet up. The word 'game' in this line also suggests that mending the wall may be some sort of competition between the two neighbours. Frost's opinion is strongly yet subtly shown in line 21: "One on a side. It comes to little more". This tells us that Frost thinks that mending the wall is a pointless exercise and to him it is nothing more than a game. This could be seen as slightly insulting to the neighbour, as the neighbour take the process of building the wall quite seriously and does not question or joke about it. ...read more.

Robert Frost often uses universal themes in his poems but uses rural imagery and rural life to convey his ideas. Frost also uses imagery in his poems, and 'Mending Wall' is no exception. The first nine lines set the image of rural New England life. There is also an example of imagery in the structure of the poem. The poem has no verses, it is one long stanza, a 'wall' of words and this creates the image of a long solid wall. The different lengths of the lines could also represent the gaps in the wall. The whole poem is written in blank verse, which is non-rhyming but in iambic pentameter. The poem contains a lot enjambment which is one line running into the next. In the poem there are five colons, which cause a pause while reading the poem. These pauses are like the gaps in the wall. I think that the message that Frost was trying to send out in this poem, was that in society we create too many barriers amongst ourselves. These metaphorical barriers stay in place for a long time, in some cases for centuries, and these barriers are present for each new generation and eventually people stop asking why the barriers are there, what good do they do, who sets them and most importantly who will break them? ?? ?? ?? ?? 9/13/2007 IB1 ...read more.