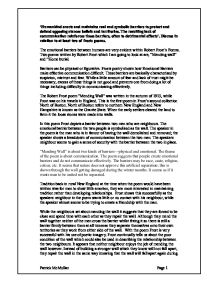 'Humankind erects and maintains real and symbolic barriers to protect and defend opposing stances beliefs and territories. The resulting lack of communication reinforces those barriers, often to detrimental effects'. Discuss in relation to at least two of frosts poems. The emotional barriers between humans are very evident within Robert Frost's Poems. Two poems written by Robert Frost which I am going to look at are, "Mending wall" and "Home burial. Barriers can be physical or figurative. Frosts poetry shows how Emotional Barriers make effective communication difficult. These barriers are basically characterised by suspicion, mistrust and fear. While a little amount of fear and lack of trust might be necessary, excess of these things is not good and prevents one from doing a lot of things including difficulty in communicating effectively. The Robert Frost poem "Mending Wall" was written in the autumn of 1913, while Frost was on his travels in England. This is the first poem in Frost's second collection North of Boston. North of Boston refers to northern New England and New Hampshire is known as the Granite State. When the early settlers cleared the land to farm it the loose stones were made into walls. In this poem Frost depicts a barrier between two men who are neighbours. The emotional barrier between the two people is symbolised as the wall. ...read more.

The speaker subsequently later in the poem decides to join in with his neighbour and also repeats the saying which his neighbour has said so often "good fences make good neighbours" which shows that he has maybe also came to the conclusion that the neighbour is extremely anti-social and does favour having minimal contact with the outside world. The speaker however agrees as he does not want to generate any further unnecessary tension between himself and the neighbour. With having the "wall" or "fence" in place he does so then to be a "good neighbour". The wall could be seen as to be having detrimental effects on the speaker as he does not favour this and wants to grow a friendship with his neighbour which is however rejected but also at the same time the act of mending the wall every year is the very thing that brings them together. Another Robert Frost poem which shows emotional barriers between people is "Home burial". The poem may not be as popular as "Mending wall" but this is Frosts most critically acclaimed and intensively analyzed narrative. Frosts deals with barriers between people yet again, in this case a husband and wife who recently lost their first child and who both handle grief in their separate ways. "Home Burial" is an intensely dramatic poem about a bereaved and increasingly estranged married couple. ...read more.

Communication is a significant theme within Frosts poetry, as he makes it clear that communication is extremely hard to achieve. The barrier between humans in the poem "Home Burial" shows the difficulties which people face when they struggle to show emotions or with a breakdown of communication. The speaker who is also the husband within the poem finds it extremely hard showing his emotions and also talking to his wife after the tragic passing of their child. This strong lack of communication is evident as this pushes the wife and husband apart. This lack of communication has resulted on having a detrimental effect with the couple's marriage as the wife can no longer look at the husband as he has expressed no emotion at all about their departed child. The neighbour in mending wall seems as if he wants very little to do with the speaker. This is shown in the poem as when the pair are repairing the wall, the neighbour or speaker never cross the wall onto the others territory so they always have a physical divide between each other at all times. The divide and lack of communication between both the speaker and also the neighbour could be seen as to have detrimental effects on the speaker as he try's so hard to build a friendship with the neighbour who continually rejects this. Humankind erects and maintains real and symbolic barriers to protect and defend opposing stances beliefs and territories. ...read more.