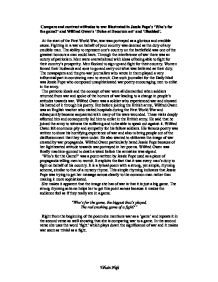 Compare and contrast attitudes to war illustrated in Jessie Pope's 'Who's for the game?' and Wilfred Owen's 'Dulce et Decorum est' and 'Disabled'. At the start of the First World War, war was portrayed as a glorious and credible cause. Fighting in a war on behalf of your country was deemed as the duty of any credible man. The ability to represent one's country on the battlefield was one of the greatest honours a man could have. Through the interference of war there was an outcry of patriotism. Men were overwhelmed with ideas of being able to fight for their country's prosperity. Men flocked to sign up and fight for their country. Women forced their husbands and sons to go and carry out what was believed as their duty. The newspapers and the pro-war journalists who wrote in them played a very influential part in convincing men to recruit. One such journalist for the Daily Mail was Jessie Pope who composed unsophisticated war poetry encouraging men to enlist in the army. The patriotic ideals and the concept of war were all dismantled when soldiers returned from war and spoke of the horrors of war leading to a change in people's attitudes towards war. Wilfred Owen was a soldier who experienced war and showed his hatred of it through his poetry. But before joining the British army, Wilfred Owen was an English teacher who visited hospitals during the First World War and subsequently became acquainted with many of the wars wounded. These visits deeply affected him and consequently led him to enlist in the British army. He said that he joined the army to witness the suffering and to be able to speak out against it. Wilfred Owen felt enormous pity and sympathy for his fellow soldiers. His famous poetry was written to show his horrifying experience of war and also to bring people out of the disillusionment that they were under. ...read more.

Poetry was written to explain war and how it is. One of the soldiers who became a poet was Wilfred Owen. Wilfred Owen wrote the poem 'Disabled' about a young man who enlisted in the army for all the wrong reasons, lost his limbs and now leads a pitiful and bitter life thinking of his past. These wrong reasons are the various influences Owen sees this man as a victim of. It is a narrative poem with a sophisticated structure. The structure is such that it reflects the sincerity and the seriousness of the poet's message. The poem starts with the man sitting in his wheelchair, longing for the dark, which is the only thing he is capable of doing. The darkness helps him escape his pathetic life. He is fed up with life and is waiting to die. "And shivered in his ghastly suit of grey," His face has gone grey showing how he is in between life and death (black=death, white=life) because his soul is dead but his body is living. The next verse says how he is legless and how the happy voices of children are saddening to him, which is the opposite of a reaction you would expect from a normal person. He is sad because he knows he can no longer be a part of it even if he wanted to. When night finally comes, sleep is like a mother to him because it the only thing that provides relief for him from this h**l of a life. "About this time Town used to swing so gay" It is evening and he remembers the atmosphere and the fun he used to have dancing with girls. But this was all before he threw his legs away in the war and he knows that none of it is ever going to come back. Now no one comes to him and everybody treats him like a disease. ...read more.

"His hanging face, like a devil's sick of sin; If you could hear, at every jolt, the blood Come gargling from the forth-corrupted lungs. Obscene as cancer, bitter as the cud" These four lines portray the man who had just died using very forceful and hideous words that make the reader cringe. He uses words such as 'devil's sick of sin' to compare the mans face to something unimaginable. These lines enlighten the audience of what soldiers have to go through and that not everything a soldier does is glorious, as it may seem. "My friend, you would not tell with such high zest To children ardent for some desperate glory, The old Lie: Dulce et decorum est Pro patria mori." In these final lines Owen assumes a relationship of friendship with Pope to get his message across in a polite manner. He makes her seem ignorant for promoting the message that war is all things glorious, without personally experiencing it. He makes it apparent to the readers and to Pope as well that the glory of war is a lie and that no one that would have experienced the situation Owen was in, would encourage anyone to go to war. In the final stanza Owen's main message in the poem is evident and that is: people are joining the army for the wrong reasons because of poems like Pope's. He concludes his poem by stating that the old Latin saying about war is a lie. "The old Lie: It is sweet and fitting to die for ones country." In conclusion it can be noted that mass propaganda took place at the beginning of the First World War because of the need to recruit men into the army. Jessie Pope's views towards war were light hearted and she exploited patriotism, which is why she contrasted so much with Wilfred Owens views. This led him to write truthful poem through personal experience because of how much he hated Pope's fickle views. Tehsin Haji ...read more.

The essay writer demonstrates a thorough understanding of the historical context of these poems. A strong linguistic analysis is given here but it is poem-by-poem, rather than a close comparison of the texts. Little is said about the technical aspects of the poem, such as poetic devices like metre and rhyme. There is much to say here; Pope's poem is masterfully constructed in every way, as is Owen's "Dulce et Decorum Est". How then can we explain the clunkiness of "Disabled"?

The essay is overlong on fairly mechanical textual analysis and too short on other aspects. Quotations are also too long though well explained. The introduction is comprehensive but the conclusion tells us nothing of how the essay writer's study has advanced his/her understanding of these poems.