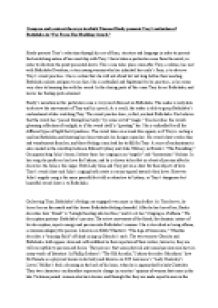 Compare and contrast the ways in which Thomas Hardy presents Troys seduction of Bathsheba in Far From The Madding Crowd.

﻿Compare and contrast the ways in which Thomas Hardy presents Troy?s seduction of Bathsheba in ?Far From The Madding Crowd.? Hardy presents Troy?s seduction through his use of form, structure and language in order to present the bewitching nature of her courtship with Troy. I have taken a particular scene from the novel, in order to illustrate the point presented above. This scene takes place soon after Troy, a soldier, has met with Bathsheba Everdene, a stern young woman who has inherited her uncle?s farm, is to observe Troy?s sword practices. She is certain that she will not attend but not long before their meeting, Bathsheba relents and goes to see him. She is enthralled and frightened by his practises, as he comes very close to harming her with his sword. In the closing parts of the scene Troy kisses Bathsheba, and leaves her feeling quite ashamed. Hardy?s narration in this particular scene is very much focused on Bathsheba. The reader is only able to observe the movements of Troy and his speech. As a result, the reader is able to grasp Bathsheba?s enchantment whiles watching Troy. The sword practice does, in fact, enchant Bathsheba. She believes that the sword has ?passed through her body,? by some sort of ?magic.? She describes the swords gleaming reflection of sunlight, as if the sword itself is ?greeting? her. ...read more.

They possess that same physical and carnal passion men have in many works of literature. In Phillip Sydney?s ?The Old Arcadia,? Sydney describes Musidorus? love for Pamela as a physical tremor in his body and likewise in D.H Lawrence?s ?Lady Chaterley?s Lover,? Mellor?s feels a burning in the back of his loins, when he is approached by lady Chaterley. Their two characters can therefore represent a change in societies? opinion of woman that came in the late Victorian period: women also have desires and through this they are made equal to men in the novels; ideals that the suffragettes upheld very much. The physical apprehension in Bathsheba?s character is also seen prior to her meeting with Troy. She changes her mind, quickly, and seeks out Troy. When reaching the pit that Troy is found, Hardy describes the way her ?eyes shone and her breath went quickly.? Her physical state heightened to a tremor and her desire to meet Troy is described as temerity, therefore, the reader receives a great deal of information concerning Bathsheba?s initial desire to see Troy. The dynamic description of her physical being creates a sense of apprehension, this could not only be discerned as desire, but it may relate to a fear of what Troy plans to undertake with her, or a need to satisfy a social expectation to meet with the needs of the promise she made with him. ...read more.

The pit is also a place of concealment. In this environment, Bathsheba and Troy are concealed away from the rest of the world, and Troy is free to practise his designs upon her, uninterrupted. The concealment of the setting reflects the concealment of Troy?s true cruelty. During their meeting, Bathsheba is completely unaware of the scandal that Troy is guilty of-he has abandoned his pregnant former lover. The pit is also a place where light is narrowly concealed. The darkness of the setting may reflect the darkness of Troy?s true character. In a similar way, in Hardy?s ?Tess of the D?Urbivilles,? Alec?s r**e of Tess is concealed in a dark and misty night. His deed like Troy?s seductive shows, is also concealed from the view of other characters, and as a result, both are cast in a sinister light, but Alec more so for is deed than Troy. In conclusion Hardy uses setting to reflect the descent that Bathsheba encounters physically and emotionally when she is to meet Troy. Hardy also describes Bathsheba?s apprehension when meeting Troy in order to cause their meeting to appear more significant to the reader than other scenes in the novel; a technique employed by Mary Shelley in ?Frankenstein.? His description of her blood rushing, and the fire that she feels inside herself functions to describe her desire for Troy, and this also signals the beginning of Bathsheba?s reason being broken into. ...read more.