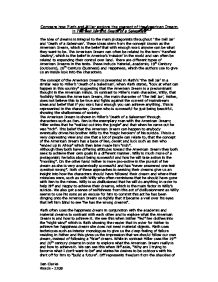 However, Plath portrays Esther as a bright young women, who has the opportunity of living the 'American Dream' but she can see through the illusion of what society thinks she should be. When she has her photo taken, she has to hold a "fake" rose and the rose doesn't represent her as a person or what she aspires to be, which is the point that Plath explores with regards to the American Dream in 'The Bell Jar'. Plath and Miller use very different techniques to represent the American Dream. This is due to the texts being of different styles; one is a novel and the other a play. That said they do share some similarities, such as non-linear narratives to give us an insight into the key themes. The techniques used give different insights into the individual thoughts of the American Dream. One technique used by Plath is the 'interior monologue', which gives us the intimate thoughts of Esther and what she thinks of the world around her. Plath uses this technique to show her thoughts about the American Dream, as though they are her own thoughts represented in Esther. This gives us a very powerful opinion on the American Dream, as it is an opinion that is close to what we may also think from reading the novel. ...read more.

In conclusion, I believe that each text explores the concept of the American Dream in very independent ways that express the opinions of the authors. Miller presents to us ideas such as to achieve the dream you have to be disillusioned which we see in the main protagonist, w***y. The combinations of techniques that Miller uses gives us the impression that nothing good can come out of the American Dream, as if almost hopeless to even have a dream. On the other hand, Plath uses the ideas of isolation being the problem, which we see in Esther's case. Plath uses the ideas of isolation coupled with depression to show the bleakness of striving to achieve a dream, which is a belief that Plath shares. This idea of isolation resonates in both main protagonists and leads back to the notion of society being the problem. Both characters don't fit in with society and are both under strain to be something they do not want to be. This gives us the sense that they are born into the wrong society and this I believe is the point that both authors try to explore, that there is nothing wrong with the characters themselves but it is the world around them that is flawed and through various narrative and stage techniques the authors convey this conclusion successfully. ...read more.