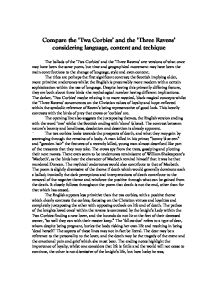 Compare the 'Twa Corbies' and the 'Three Ravens' considering language, content and techique The ballads of the 'Twa Corbies' and the 'Three Ravens' arte versions of what once may have been the same poem, but time and geographical movement may have been the main contributions to the change of language, style and even content. The titles are perhaps the first significant contrast; the Scottish implying older, more primitive undertones whilst the English is presumably more modern with a certain sophistication within the use of language. Despite having this primarily differing feature, they are both about three birds -the mythological number having different implications. The darker, 'Twa Corbies' maybe relating it to more mystical, black magical concepts whilst the 'Three Ravens' concentrates on the Christian values of loyalty and hope -reflected within the symbolic reference of Raven's being representative of good luck. This heavily contrasts with the birds of prey that crows or 'corbies' are. The opening line also suggests the juxtaposing themes, the English version ending with the word 'tree' whilst the Scottish ending with 'alane' (alone). ...read more.

The aspects of these lines may not in fact be literal. The dear may be a reference to the personality to the lover, and the death may be the tragedy of the event and the emotional pain and grief which she must bear. The ending notes highlight the importance of loyalty, whilst one considers that life is futile and the world will not cease to continue, the other is not dismissive of the knight's life, but how lucky he was, sentimentalising the theme. The imagery of the 'Twa Corbies' seems to have a gross detachment, even refering to the corpse of the knight to an "auld fail dike" meaning no more than a turfed mound whilst the 'Three Ravens' notes the body "down in yonder greene field." And whilst the crows talk about picking out the eyes of the corpse for treasure, the "fallow doe" "kissed the wounds that were so red." The compassionate words disntinctly contrast the 'Twa Corbies' in gentler action. The repetition of 'His' three times within the third stanza of the 'Twa Corbies' attributes to the sense of the poem being comparable to a chant, or spell; with the mystical undertones of Macbeth. ...read more.

A man may have died, but the world continues to move, and "The wind sall blaw for evermair." The English leans towards the more obvious approach of how one may be positive throughout a tragic event. The three ravens follows the route of loyalty, sincerity and the Christian values intrinsically virtuous action. The daintily appearing manuscript is gentler and more civilised version of the brutality within the Scottish version. The techniques contribute to the type of audience that it would appeal to. The English would probably be aimed at the aristocratic audience, with the possible intervention of the English folk singing of "with a derry down" between the lines. It also conveys a sense of 'naturalness' and one should not the high proportion of monosyllabic and easily accessible words. This may have contributed to the accessibility to children; tales of morality and virtuous teachings may have been projected through ballads and poems such as this. The language of the Scottish immediately strikes one as being more working-class based, with the clear dialect and abbreviations. It would perhaps have been sung by the less privileged; reminding themselves of what they have and how to make the best of a potentially disasterous situation. ...read more.

This essay has the potential to be a very good essay as it clearly understands the two poems and discusses their similarities and differences. More PEA is needed throughout and topic sentences are needed at the beginning of each paragraph. Proof reading is needed and there are some lapses in expression which make the meaning unclear. Good for including discussion of audience for both poems.