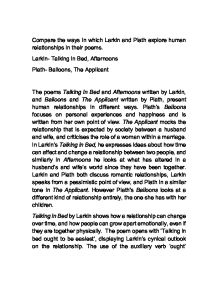 Compare the way Larkin and Plath present human relationships in their poems.

Compare the ways in which Larkin and Plath explore human relationships in their poems. Larkin- Talking in Bed, Afternoons Plath- Balloons, The Applicant The poems Talking in Bed and Afternoons written by Larkin, and Balloons and The Applicant written by Plath, present human relationships in different ways. Plath's Balloons focuses on personal experiences and happiness and is written from her own point of view. The Applicant mocks the relationship that is expected by society between a husband and wife, and criticises the role of a woman within a marriage. In Larkin's Talking in Bed, he expresses ideas about how time can affect and change a relationship between two people, and similarly in Afternoons he looks at what has altered in a husband's and wife's world since they have been together. Larkin and Plath both discuss romantic relationships, Larkin speaks from a pessimistic point of view, and Plath in a similar tone in The Applicant. However Plath's Balloons looks at a different kind of relationship entirely, the one she has with her children. Talking in Bed by Larkin shows how a relationship can change over time, and how people can grow apart emotionally, even if they are together physically. The poem opens with 'Talking in bed ought to be easiest', displaying Larkin's cynical outlook on the relationship. The use of the auxiliary verb 'ought' shows that talking in bed isn't easy, even though it should be, which is shown by the line 'yet more and more time passes silently'. ...read more.

This represents feelings of destress and the want to say things and express emotions that people can't, then the moment passes and it's too late to mention. The line 'and dark towns heap up on the horizon' shows that these feelings have been building over time. The 'horizon' represents the future and hope for the relationship, however the 'dark towns' problematise that future. This section of the poem presents images that are threatening and suggests that for the outside world their relationship has no meaning, shown by the line 'None of this cares for us.' This is ironic as Larkin is arguing that most relationships are like the one he is describing, shown through use of the inclusive pronouns 'this' and 'us'. The final stanza shows that these circumstances are not changing. 'It becomes still more difficult to find, Words at once true and kind, Or not untrue and not unkind.' The use of the word 'still' shows that things are not improving. The antonyms 'true', 'untrue' and 'kind' and 'unkind' are juxtaposed with each other to represent the feelings of emptiness. If the words are neither true nor untrue, therefore they are nothing, and meaningless. While Larkin uses nature to create imagery, Plath uses artificial objects to create images of falsity in The Applicant. The poem critiques a stereotypical idea of a man's ideal wife from Plath's feminist point of view. ...read more.

The lines 'And the albums, lettered/Our wedding, lying/Near the television' shows how the images of marriage can just be for show, as the wedding album is placed near the television and what people view on TV is what we want to see and not necessarily a true picture of a person's life. Afternoons shows how life changes from being young and in a relationship to being older and married. Larkin's techniques and language show that growing older can make you look back on things that once were, and the realisation of knowing it is going to come to an end, yet other people still have time to experience their own relationships. Both poets explore the emotions linked to relationships from different perspectives. Unlike Larkin, Plath shows her optimistic attitude in Balloons, and how time passing will allow the relationship with her children to grow and develop, rather than decay. Larkin's pessimism is shown in both Talking in Bed and Afteroons, where he explores the idea that human and romantic relationships will always come to an end, and once they begin all they can do is decay. However Plath's cynical attitude to romantic relationships in The Applicant is similar to Larkin's, which may be due to her marriage to Ted Hughes influencing her writing. Although Plath is more comfortable, writing from her own point of view rather than using Larkin's style of a non specific narrator, it is clear both poets write about different yet similar kinds of relationships based on their own personal experience. ...read more.