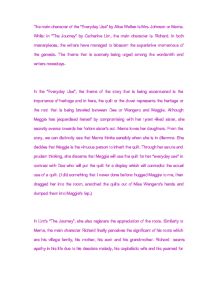 comparison between everyday use and the journey

The main character of the "Everyday Use" by Alice Walker is Mrs. Johnson or Mama. Whilst in "The Journey" by Catherine Lim, the main character is Richard. In both masterpieces, the writers have managed to blossom the superlative momentous of the genesis. The theme that is scarcely being urged among the wordsmith and writers nowadays. In the "Everyday Use", the theme of the story that is being accentuated is the importance of heritage and in here, the quilt or the duvet represents the heritage or the root that is being brawled between Dee or Wangero and Maggie. Although Maggie has jeopardised herself by compromising with her tyrant-liked sister, she secretly averse towards her forlorn sister's act. Mama loves her daughters. From the story, we can distinctly see that Mama thinks sensibly when she is in dilemma. She decides that Maggie is the virtuous person to inherit the quilt. Through her astute and prudent thinking, she discerns that Maggie will use the quilt for her "everyday use" in contrast with Dee who will put the quilt for a display which will contradict the actual use of a quilt. (I did something that I never done before: hugged Maggie to me, then dragged her into the room, snatched the quilts out of Miss Wangero's hands and dumped them into Maggie's lap.) ...read more.

of requesting the paramount quilt and the butter churn that Dee herself does not know how to operate and make use of it. This is evidently shown when at first Mama addresses Dee as Wangero but towards the end, she addresses her as Dee again. Richard on the other hand, shows sarcasm towards his wife, Mabel inaudibly because he still fond on his wife that somehow concerns over his health. It is likely to be an irony when he wishes to be with his roots for he believes that they can cure him although the verified fact is that only the modern technology might cure him from his malignant growth. Richard actually do not want to heal his ailment because he realises that he can no longer survive the disease as his doctor fails to make early detection of his terminal malady. ("I blame him," said Mabel bitterly. "You have been going to him regularly for the past four years, and how is it possible that he didn't detect it earlier?...). Richard finally resort that he should be more sensible by making a soul journey that likely to cure his remediable broken-hearted soul that is endeavouring his loneliness and longing for his roots and childhood. ...read more.

For instance, Mama does not have any conflicts involving her nuptial problems. She just has to waylay her heritage problem which is between her children. The poor-stricken life has disorganised her family completely. Though this might affect her lifestyle, she never forgets her heritage. This is likely differing to Dee who is live a very sophisticated life and educated but she is lack of what Mama and Maggie know what the quilt significant to. In Richard, he has to face his conjugal problems, his health problems, his roots and himself. Compared to Mama, Richard does not have any problems between his beloved children. This is because his children are well-feed with silver spoon in their mouth. They can easily get what they want in a blink. For example, Mark gets a go-kart and Annabelle gets a new piano by Mabel. In a conclusion, a story can never shines with lame protagonist and simple life. The kaleidoscopic lifestyles and characterisations given by the authors to the characters in their story have given a prodigious impact to the storylines and at the same time determine the reader's reaction. Readers somehow do not share the same interest; therefore, a good writer should use this opportunity to widen their story field and somehow will produce the masterpiece that will captivate every reader's interest. ...read more.