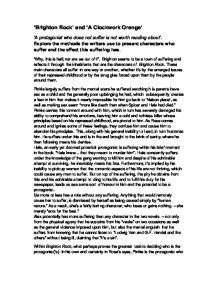 Comparison of Brighton Rock &amp; A Clockwork Orange. Explore the methods the writers use to present characters who suffer and the effect this suffering has.

'Brighton Rock' and 'A Clockwork Orange' 'A protagonist who does not suffer is not worth reading about'. Explore the methods the writers use to present characters who suffer and the effect this suffering has. "Why, this is h**l; nor are we out of it". Brighton seems to be a town of suffering and reflects it through the inhabitants that are the characters of Brighton Rock. These main characters all suffer in one way or another, whether it's by the emerged issues of their repressed childhood or by the struggles forced upon them by the people around them. Pinkie largely suffers from the mental scars he suffered watching his parents have s*x as a child and the generally poor upbringing he had, which subsequently creates a fear in him that makes it nearly impossible for him go back to 'Nelson place', as well as making s*x seem "more like death than when Spicer and Hale had died." Pinkie carries this torment around with him, which in turn has severely damaged his ability to comprehend his emotions, leaving him a cold and ruthless killer whose principles based on his repressed childhood, are pivotal to him. As Rose comes around and ignites some of these feelings, they confuse him and cause him to abandon his principles. This, along with his general inability to lead, in turn frustrates him. ...read more.

Rose is perhaps the only main character who isn't actually a protagonist. She mostly serves the function of "damsel in distress" to the "protagonist" (Pinkie) - but even so, she's perhaps more the "distressing damsel" than "damsel in distress". Either way, she doesn't particularly fit the function of protagonist, despite the fact that she is evidently a nice person - albeit an idiotic one. Hale is essentially different. He could well be interpreted as a 'false protagonist', in that he's the main character of the first chapter and then one who we follow around but is then suddenly found dead by Ida. However, being a false protagonist entices that the shift of focus comes as a shock or surprise, which it doesn't in the case of Hale, as he knew that Pinkie and his gang "meant to murder him". But he still retains the qualities of a false protagonist, so essentially becomes a false-false protagonist - and perhaps in that sense the falseness cancels out and leaves him as just a protagonist. What does complicate the assumption that he's the protagonist is what we don't know about him. It's implied that he betrayed Kite in some way and that he knows "how Kite was killed". By his involvement with Pinkie's and Colleoni's respective gangs, we can assume that he's involved with their criminal affairs, but we don't know to what extent. ...read more.

I've done my best here". Regardless, the sinister intellect of Alex seems to give him a greater appeal to the reader, as he's able Alex is by no means the typical kind of protagonist - in fact, he's an awful person who likes "a bit of twenty-to-one" and the odd "ultra violence" and seen from the perspective of any other characters within the book, he would be the antagonist. He is however the book's only narrator and to some extent a kind of Byronic hero. Furthermore, since no other character within the book is given a significantly big part, he is perhaps by default the protagonist. What further strengthens Alex's role as the protagonist is the generally antagonistic behaviour of the other characters in the book, such as that of F. Alexander and his colleagues who torture Alex for their political gain. With Alex's opposition being antagonistic in nature, we're compelled to empathise more with Alex due to him being presented as the victim (thus prompting the empathy), despite him victimising old 'ptitsas' and whoever else proves unlucky enough. The protagonists in Brighton Rock do suffer. It's questionable who the protagonists actually are, but the characters that do suffer are the ones more likely to be protagonists, than those who don't. As such, it is in the case of Brighton Rock the lesser characters that are more likely to be protagonists than the main characters - as the main characters simply don't suffer in any sense that prompts empathy. ...read more.