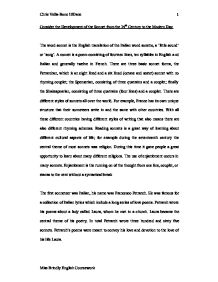 Consider the Development of the Sonnet from the 14th Century to the Modern Day. The word sonnet is the English translation of the Italian word sonetto, a 'little sound' or 'song'. A sonnet is a poem consisting of fourteen lines, ten syllables in English and Italian and generally twelve in French. There are three basic sonnet forms, the Petrarchan, which is an eight lined and a six lined (octave and sestet) sonnet with no rhyming couplet; the Spenserian, consisting of three quatrains and a couplet; finally the Shakespearian, consisting of three quatrains (four lines) and a couplet. There are different styles of sonnets all over the world. For example, France has its own unique structure that their sonneteers write in and the same with other countries. With all these different countries having different styles of writing that also means there are also different rhyming schemes. Reading sonnets is a great way of learning about different cultural aspects of life; for example during the seventeenth century the central theme of most sonnets was religion. During this time it gave people a great opportunity to learn about many different religions. The use of enjambment occurs in many sonnets. Enjambment is the running on of the thought from one line, couplet, or stanza to the next without a syntactical break The first sonneteer was Italian, his name was Francesco Petrarch. ...read more.

At the conclusion of the poem, (the rhyming couplet) Shakespeare writes 'So long as men can breathe or eyes can see, So long lives this, and this gives life to thee.' This quotation informs the reader that she may die. However she will stay alive through the poem. The poem 'Composed Upon Westminster Bridge' written in 1802 by William Wordsworth is about Wordsworth love of natural world and the city of London. The first line of the sonnet reads 'Earth has not anything to show more fair.' In this quotation Wordsworth is sitting on Westminster Bridge looking across the beautiful city of London and is besotted with the picturesque view and feels the world has nothing to compare to it. William Wordsworth writes 'All bright and glittering in the smokeless air.' This quotation informs the reader of the beautiful sunrise and how it glitters across the city. Wordsworth writes 'The river glideth at his own sweet will.' This quotation means that the Thames has many bends on its path through the city of London and has not got a straight journey like other rivers. Wordsworth metaphorically states that the river glides freely. This sonnet is very popular and was voted 24th most popular poem in 1998. ...read more.

The sonnet is written in the first person; this is because Petrarch is expressing his love to Laura (There is a direct address to the lady). Petrarch uses many abstract nouns in his writing; he uses two in the title, vanity and passion. The reason for Petrarch using several abstract nouns is that it reflects the abstract nature of his love. Petrarch writes 'Throughout my song, by hopes and vain grief's bed;' this quotation means that Petrarch recognises that he was vain ever to believe that she might ever love him. When Petrarch was younger he thought he was in love; he now realises what it means to be 'in passion drowned;' Petrarch writes 'That worldly pleasure is a passing dream.' This quotation informs that the love is short and can't last. His love is like a dream. The mood of the poem is very desolate as Petrarch wants something he is unable to achieve. In conclusion the central sonnet theme has not changed in hundreds of years, many are still written today. As time has progressed different forms have been introduced such as the Spenserian and the Shakespearian. My favourite sonnet is 'Shall I compare thee' because Shakespeare uses many descriptive language associated with summer and his mysterious woman, this shows the depth of his love for her. ?? ?? ?? ?? 1 Chris Vella-Bone 10Dane Miss Brindly English Coursework ...read more.