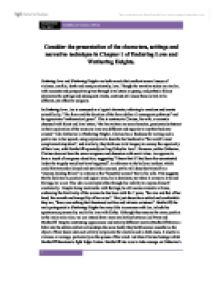 Consider the presentation of characters, settings and narrative in chapter 1 of Enduring Love and Wuthering Heights

Consider the presentation of the characters, settings and narrative technique in Chapter 1 of Enduring Love and Wuthering Heights. Enduring Love and Wuthering Heights are both novels that confront several issues of violence, conflict, death and most prominently, love. Though the narrative styles are similar, with accounts and perspectives given through love letters or gossip, and pathetic fallacy dominates the settings and subsequent events, contrasts still cause these novels to be different, yet effective uniquely. In Enduring Love, Joe is conveyed as a logical character, referring to emotions and events scientifically, "The force and the direction of the force define all consequent pathways" and he appreciates "mathematical grace". This is contrary to Clarissa, his wife, a romantic obsessed with Keats and love letters, "she has written me some beauties, passionately abstract in their exploration of the ways our love was different and superior to any that had ever existed." Like Catherine in Wuthering Heights, Clarissa has a fondness for writing and is poetic also in her speech, using oxymoron to describe her husband as "the world's most complicated simpleton", and similarly, they both use vivid imagery to convey the superiority of their love, with Heathcliff repeatedly calling Cathy his 'soul'. However, unlike Catherine, Clarissa does not bear the same arrogance and obsession with social class. ...read more.

We can also compare the sympathy we feel at times for both characters, when they seem weak and pathetic due to their all-encompassing love, which at times, and especially with Heathcliff, shrouds their true terrible personality. A saying at the time was "a reformed rake makes the best husband", and although the reader may constantly justify Heathcliff as a Byronic hero, many critics, such as Charlotte Bronte argue that he is "violent and destructive". Parallels can be drawn also between the two strictly religious and evangelical characters of Joseph and Jed, both determined and deeply devoted to their religion. John Logan, a respectable, fit and married doctor with two children shares the same ideas of how to salvage the situation as Joe, yet unlike him, he holds a "flame of altruism", and is as a result the only man to keep hold of the fated balloon. This character is reminiscent of Mr. Earnshaw, saving Heathcliff, a mere gipsy boy from the streets of Liverpool and bringing him into his family, treating him like a son. Joe mentions that part of his selfish will to live, letting go of the balloon, was the knowledge that it was not his child, and yet Logan acts as though it were, as did Mr. ...read more.

HeahThe narrator tends to be, however, partially unreliable or biased. Nelly's strong feelings for the characters may complicate her retelling of the story to Lockwood, whilst Joe's denial of all responsibility for the incident may suggest he is not reliable. Joe tells the reader, "what I describe is shaped by what Clarissa saw too" and what they had formulated through their "obsessive re-examination". The stories may also be complicated through the length of time since they occurred for Nelly, and the shock of the event itself, Joe himself says that time seemed to out of sync during the ballooning accident. The telling of the stories differ as Wuthering Heights has a complex back and forth structure with events revisited from various perspectives whilst Enduring Love tends to be a chronological telling of events throughout, with the occasional perspective of Jed, who although lengthy in his writing to Joe, is unreliable due to his mental condition. It is easy to see the recurring themes which link the two novels, of love and conflict, and these ideas are conveyed in similar ways, using pathetic fallacy and a technique of looking back of events whilst hinting to the reader the outcome, penetrating them with a sense of fateful premonition and suspense. The similarities in the storytelling show just how effective these methods are, due to the success and impact of both Enduring Love and Wuthering Heights. 1 http://www.wuthering-heights.co.uk/locations/wutheringheights.htm ?? ?? ?? ?? September 18, 2011 ISABELLE NICOL 6PSS 1 ...read more.