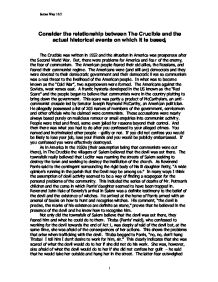 Consider the Relationship Between the Crucible and the Actual Historical Events On Which It Is Based.

Consider the relationship between The Crucible and the actual historical events on which it is based. The Crucible was written in 1952 and the situation in America was prosperous after the Second World War. But, there were problems for America and fear of the enemy, the fear of communism. The American people feared their old allies, the Russians, and feared their communist regime. The Americans were (and still are) democrats and they were devoted to their democratic government and their democratic lives so communism was a real threat to the livelihood of the American people. In what was to become known as the "Cold War", two superpowers were formed. The Americans against the Soviets, west verses east. A frantic hysteria developed in the US known as the "Red Scare" and the people began to believe that communists were in the country plotting to bring down the government. This scare was partly a product of McCarthyism, an anti-communist crusade led by Senator Joseph Raymond McCarthy, an American politician. He allegedly possessed a list of 205 names of members of the government, servicemen and other officials who he claimed were communists. These accusations were nearly always based purely on malicious rumour or small enquiries into communist activity. People were tried and fined, some even jailed for reasons beyond their control. And then there was what you had to do after you confessed to your alleged crimes. You named and incriminated other people - guilty or not. ...read more.

She was, however, also afraid of what the devil would do to her if she did not confess her guilt - he said that he would take her outside and hang her in the street. The latter fear outweighed the fear of the devil resulting in Tituba confessing to her crimes and seeking forgiveness from God. Tituba was not the only one who feared the devil. Parris was also quite afraid of the devil and of what the devil could do to him. He said in fright when speaking of his daughter, "how can it be the devil? Why would he choose my house to strike? We have all manner of licentious people in this village." He was scared of losing his apparently ill daughter and scared of the threat that the devil posed to the God as he is a clergyman. He was worried that the presence of the devil in his house would tarnish his reputation as a respected member of the community. The fear of the devil began to split the community but it was not the only thing creating a social divide in Salem. A lot of the community distrusted one another. The relationship between John Proctor and his wife Elizabeth is a very good example of this. Their relationship was based on distrust, resentment and bitterness largely due to the affair that John had had with Abigail Williams. ...read more.

The next stage of the court was to name others quite similar to the courts in 1950s America. The people of Salem recognised that this was a way to get "off the hook", especially the girls who had been dancing in the wood. They had reeled off a long list of names of people who they claimed they had seen with the devil. So, as the accused were expected to name others it came as a shock to Danforth when John Proctor would give no names of people he had seen (or not seen) consorting with the devil. Proctor also refused to sign his name as one who had confessed although he accepted his confession. He firmly stated, "It is my name. I have given you my soul; leave me my name." It is possible to draw many comparisons between the Salem Witch Trials and the McCarthy Witch Hunts in terms of the way in which the courts were operated and the social aspects of the two periods. The main factor of both periods was the assumption of an enemy believed to be out there seeking to ruin the life of the community. We can learn a lot of lessons today from the Salem Witch Trials and from the McCarthy Witch Hunts about effects that the harsh world of rumour, deceit and wrong accusations can have on people's lives. Despite the age of The Crucible there are many issues included in it that are still very relevant in the modern world. James Way 10.5 1 ...read more.