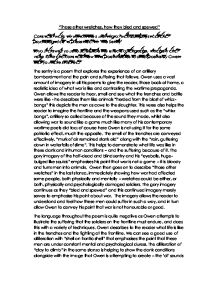 Consider ways in which the suffering of war, both physical and psychological, is presented in The Sentry

"Those other wretches, how they bled and spewed" Consider ways in which the suffering of war, both physical and psychological, is presented in 'The Sentry' In your answer, you should explore the effects of language, imagery and verse form, and consider how this poem relates to other poems by Owen that you have studied. The sentry is a poem that explores the experience of an artillery bombardment and the pain and suffering that follows. Owen uses a vast amount of imagery in all his poems to give the reader, those back at home, a realistic idea of what war is like and contrasting the wartime propaganda. Owen allows the reader to hear, smell and see what the trenches and battle were like - he describes them like animals "herded from the blast of whizz-bangs" this depicts the men as cows to the slaughter. ...read more.

Owen then goes on to describe "those other wretches" in the last stanza, immediately showing how war had affected some people, both physically and mentally - wretches could be either, or both, physically and psychologically damaged soldiers. The gory imagery continues as they "bled and spewed" and this continued imagery merely serves to emphasise his point about war. The imagery allows the reader to understand and feel how these men could suffer in such a way, and in turn allow Owen to convey his point that war is not honourable or good. The language throughout the poem is quite negative as Owen attempts to illustrate the suffering that the soldiers on the frontline must endure, and does this with a variety of techniques. ...read more.

The repetition of the words "I'm blind" illustrate the horrific images that soldiers had seen. These pain-filled words are very powerful in evoking a sense of pathos for these men, and of course the blind man, because Owen makes it very easy to see this suffering and empathise; the painful images are horrifying to any reader. This gory and pathetic language continues in "Those other wretches, how they bled and spewed" The word wretches in itself demonstrates that these soldiers have become dehumanised and are almost devoid of any emotion - this is a point that Owen makes in many of his poems, no least in "Futility". It also evokes a slight feeling of sorrow for what these people have become during the war. The words bled and spewed are rather gory ones and further demonstrate how war is not heroic but destructive and can never be a good thing. ...read more.