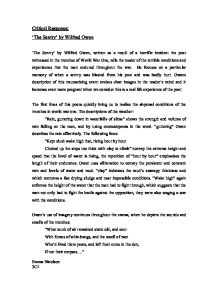 Critical Response: 'The Sentry' by Wilfred Owen 'The Sentry' by Wilfred Owen, written as a result of a horrific incident the poet witnessed in the trenches of World War One, tells the reader of the terrible conditions and experiences that the men endured throughout the war. He focuses on a particular memory of when a sentry was blasted from his post and was badly hurt. Owens description of this traumatising event evokes clear images in the reader's mind and it becomes even more poignant when we consider this is a real life experience of the poet. The first lines of this poem quickly bring us to realise the abysmal conditions of the trenches in world war one. The descriptions of the weather: "Rain, guttering down in waterfalls of slime" shows the strength and volume of rain falling on the men, and by using onomatopoeia in the word ''guttering" Owen describes the rain effectively. The following lines: "Kept slush waist high that, rising hour by hour Choked up the steps too thick with clay to climb" convey the extreme height and speed that the level of water is rising, the repetition of "hour by hour" emphasises the length of their endurance. ...read more.

The sentry is first introduced into the poem after the shell Owen describes has hit: "And thud! flump! thud! down the steep steps came thumping And splashing in the flood, deluging muck - The sentry's body;" The onomatopoeia used emphasises the helplessness of the sentry as he is falling down the steps, "splashing in the flood" again emphasizes the volume of water in the trenches, "deluging muck" shows the extreme amount of mud accompanying the water. By saying "The sentry's body" Owen implies that the sentry is already dead. "We dredged him up, for killed, until he whined 'O sir, my eyes - I'm blind - I'm blind, I'm blind!' " 'dredged' insinuates an enormous effort my Owen and his men to lift the sentry out of the mud and water, 'for killed' again shows that Owen believed him dead. The use of the word 'whined' in describing the sentry's speech proposes the sentry's suffering and inability to properly use his voice. Quoting his speech indicates that the incident that he witnessed had a very strong impact on him. The repetition in the sentry's speech also helps show his desperation and vulnerable state and evokes sympathy in the reader. ...read more.

and the onomatopoeia in "wild chattering" shows how shaken and traumatised he must have been, and how Owen himself was shaken and was listening to him. Owen finishes his poem: "Through the dense din, I say, we heard him shout 'I see your lights!' But ours had long since died out." He uses alliteration efficiently "dense din" which shows the level of noise that there was in the trenches. There is a definite tone of bitterness and resentment in the final line: "'I see your lights!' But ours had long since died out." The two meanings, that not only had the lights they were carrying had died out, that also their hope had gone, a very pessimistic ending to the poem. I believe that the theme throughout the poem is distinctly the horror of war. Owen conveys this message through a horrific incident, which had stayed clear in his mind and had affected him deeply. His tone is bitter and at times sarcastic and shows his anger towards the war. I think that Owen has portrayed his personal experiences of the war brilliantly in this poem and I believe he has succeeded in showing the reality of the war and the fact that there is nothing wonderful about war. Emma Nicolson 3C1 ...read more.

The writer has engaged with the poem and provides some insight into poetic techniques. A good deal of evidence is used throughout. To improve, the essay would benefit from clearer planning, using poetic techniques or aspects of narrative to structure the essay. For example, a paragraph to explore narrative voice, another to explore imagery, another to explore structural features of rhythm and rhyme and so on. This would enable a much more coherent essay that did not need to wade through the poem line by line. Careful planning will ensure important aspects are not missed altogether, as was the case here, where structural features were ignored. Overall ***, but only just.