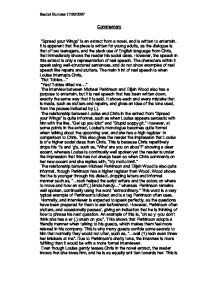 Commentary "Spread your Wings" is an extract from a novel, and is written to entertain. It is apparent that the piece is written for young adults, as the dialogue is that of two teenagers, and the slack use of English language from Chris, that immediately shows the reader his social class. However, the speech in this extract is only a representation of real speech. The characters within it speak using well-structured sentences, and do not show examples of real speech like repairs and stutters. The main hint of real speech is when Louisa interrupts Chris, "But Tobias..." "Yes! Tobias killed me..." The interview between Michael Parkinson and Elijah Wood also has a purpose to entertain, but it is real speech that has been written down, exactly the same way that it is said. It shows each and every mistake that is made, such as stutters and repairs, and gives an idea of the tone used, from the pauses indicated by (.). The relationship between Louisa and Chris in the extract from "Spread your Wings" is quite informal, such as when Louisa appears sarcastic with him with the line, "Get up you idiot" and "Stupid soppy git." ...read more.

rach even threw her knickers at me". Due to Parkinson's chatty tone, the interview is more fulfilling than it would be with a more formal interviewer. Even though Louisa gently teases Chris in the novel extract, the reader knows that she loves him, and he is as equally smitten towards her. This is apparent from Chris continually asking for conformation that Louisa is back and no longer dead, for example, "Sen' back? For...forever?" and "I have you back?" The relationship is further confirmed as those of lovers through the paralinguistics, as the couple often touch each other, like hand holding and kissing. Another aspect of the extract that shows how close the two protagonists are is the adjacency pairs used. The way the characters respond to each other shows that the speech is fast paced showing that they know each other well. This is contrasted by Louisa's relationship with her daemon killer Tobias. Her tone, which has been friendly, though somewhat fondly sarcastic and bossy, changes to an icy tone. She is frostily polite, exchanging an opening sequence with, "Hello Tobias." ...read more.

Parkinson rarely interrupts or discusses his views, and lets Elijah talk for most of the interview, gently prodding Elijah to the right topic with occasional questions. Parkinson gives a lot of positive feedback, such as, "/mmmm/" and "/oh really?/". Often he will ask Wood one question and allow him to go off on a tangent before looping the topic back to where he wanted it of changing the subject known as a topic shift. Again, this shows why guests are so comfortable in Parkinson's company that he does not nag them or put them off. Overall, these two pieces show a clear distinction between real speech and a representation of real speech. The interview gives examples of repairs and speech defects, but showing an interesting twist that the interviewer makes mistakes as well. The extract shows that a representation of speech is constructed in sentences, with no self-repairs. An accent can be shown, but normally is only an example of the accent. If it were all written exactly how it sounded, it would be extremely hard to read. Both pieces also show difference of speech to different people, particularly in the novel extract as we see the way Louisa talks to someone she loves, then someone she hates. Rachel Burrows 17/09/2007 ...read more.