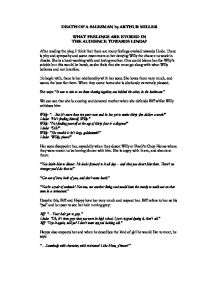 Death of a Salesman by Arthur Miller - What feelings are evoked in the audience towards Linda?

DEATH OF A SALESMAN by ARTHUR MILLER WHAT FEELINGS ARE EVOKED IN THE AUDIENCE TOWARDS LINDA? After reading the play, I think that there are many feelings evoked towards Linda. There is pity and sympathy and some resentment at her denying w***y the chance to work in Alaska. She is a hard-working wife and loving mother. One could blame her for w***y's suicide but this would be harsh, as she feels that she must go along with what w***y believes and not interfere. To begin with, there is her relationship with her sons. She loves them very much, and wants the best for them. When they come home she is obviously extremely pleased. She says: "It was so nice to see them shaving together, one behind the other, in the bathroom." We can see that she is a caring and devoted mother when she defends Biff whilst w***y criticises him: w***y: "...But it's more than ten years now and he has yet to make thirty-five dollars a week!" Linda: "He's finding himself, w***y." w***y: "Not finding yourself at the age of thirty-four is a disgrace!" Linda: "Shh!" w***y: "The trouble is he's lazy, goddammit!" ...read more.

Despite this, she is thrilled when she sees it gone, though she later discovers that it was Biff who removed it. She is also too ashamed to admit to knowing that w***y is borrowing money from Charley, pretending that it's his pay. "w***y, darling, you're the handsomest man in the world...To me you are. The handsomest. "...because I love him. He's the dearest man in the world to me, and I won't have anyone making him feel unwanted and low and blue. You've got to make up your mind now, darling, there's no leeway any more. Either he's your father and you pay him that respect, or else you're not to come here. I know he's not easy to get along with - nobody knows that better than me - but..." She shows here her love for w***y, and her faithfulness, even though we know that w***y has been disloyal to her. She tells her children her fears, and that she believes that only they can help him. "Biff, I swear to God! Biff, his life is in your hands!" "...When he has to go to Charley and borrow fifty dollars a week and pretend that's his pay? ...read more.

I want Swiss cheese. Why am I always being contradicted?" Linda is also correct in her vision of the upbringing of their children, though w***y's bad influences shadow it, and so the children never take any notice of her. We see her in Act one attempting to persuade w***y that it would be right for Biff to take the stolen football back: "And he'd better give back that football, w***y, it's not nice." According to Linda, Biff is "too rough with the girls" though w***y puts this down to the fact that "he's got spirit, personality..." Despite the many hardships Linda has to face, we can see that she has a strong personality herself, and therefore we feel a lot of pity and sympathy for her at her husband's funeral: "I can't understand it. At this time especially. First time in thirty-five years we were just about free and clear. He only needed a little salary. He was even finished with the dentist." Ultimately, the feelings evoked towards Linda in this play are sympathy, pity, and concern. There is also admiration felt for the woman who shared her husband's dreams, and took in all the criticism that was hurled her way in a calm and somewhat melancholy manner. ...read more.