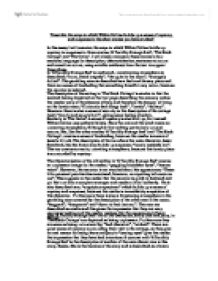 'Describe the ways in which Wilkie Collins builds up a sense of mystery and suspense in the short stories you have studied' In this essay I will examine the ways in which Wilkie Collins builds up mystery in suspense in three stories; 'A Terribly Strange Bed', 'The Black Cottage' and 'The Ostler'. I will closely compare these stories in four sections; language for description, characterisation, sentence structure and overall structure, using suitable evidence from the text to support these ideas. In 'A Terribly Strange Bed' an awkward, unwelcoming atmosphere is described; "mute, weird tragedy", "the quiet in the room", "strangely dulled". The gambling room is described as a dark and dreary place and there is a sense of foreboding that something dreadful may occur, because the narrator is isolated. The description of the setting in 'The Black Cottage' is similar in that the isolated feeling depicted on the first page describing the scenery makes the reader wary of the absence of help and therefore the danger of living on the lonely moor; "Curiously dark dingy look", "lonely", "solitary". However there is also a sense of security in the description of the cottage itself; "stoutly and snugly built", giving some feeling of safety. Similarly in 'The Ostler' a sense of mystery is also built up, but instead Wilkie Collins uses pathetic fallacy. Here the rain and the wind create an unnerving atmosphere. Although at first nothing particularly unusual occurs, this, like the other stories; 'A Terribly Strange bed' and 'The Black Cottage', creates a sense of foreboding, because the reader is aware of Isaac's ill-luck. ...read more.

This gives the reader a sense of setting and lulls them into a false sense of security. In 'The Black Cottage' the long sentences at the beginning of the story set the scene; "The nearest habitation to ours was situated about a mile and a half off, where a strip of fertile land stretched out into the waste, like a tongue." Although here there are also paragraphs to report; "I was just getting the tea caddy when I heard footsteps in the passage..." Here there is a sense of drama and mystery with added mundane facts, which under normal circumstances the reader would not need to know. However this cunning device retains the mystery and so tension is built up. Like 'A Terribly Strange Bed', 'The Ostler' uses long sentences to set the scene and introduce the main character; There is also a common use of short sentences and punctuation in al "Some years ago, there lived in the suburbs of a large seaport town, on the west coast of England, a man in humble circumstances, by the name of Isaac Scatchard." As I have previously mentioned, the reader is made aware of Isaac's ill luck and this could give a hint to what may occur later in the plot. There is also a common use of short sentences and punctuation in all three stories. In all three cases this is to increase tension. For example in 'A Terribly Strange Bed' the use of short sentences and punctuation speeds up the section, increasing suspense by involving the reader; "I was wide awake, and high with fever." ...read more.

In general the three short stories that I have studied, 'A Terribly Strange Bed', 'The Black Cottage' and 'The Ostler' all contain similar devices to create a sense of mystery and suspense. This can especially be seen in the language and characterisation, as Wilkie Collins has created lonely, isolated and even unpleasant atmospheres that all involve a sense of foreboding in all three. He also describes many of his characters as untrustworthy, suspicious or imperfect. This is of course excluding Bessie from 'The Black Cottage' who is described as a heroine, which is very unusual for the era in which these short stories were written. There are also many similarities between the sentence structure of the stories as all contain sections of long sentences, to relax the reader and lull them into a false sense of security followed by sections of short sentences with lots of punctuation, to create very tense pieces of drama, which are extremely effective as they have been delayed by the mundane descriptions. One of the main contrasts between these stories is their ending. In 'A Terribly Strange Bed' and 'The Ostler' the reader is left on a cliffhanger with an unresolved plot. However, on the other hand in 'The Black Cottage' the mystery and suspense created throughout the main plot is set aside for a rather duller ending, where the thieves are caught and everyone lives happily ever after. In my opinion this ending could be improved greatly, for example by not catching the villains. This could also be true for 'A Terribly Strange Bed' although there is still a mystery behind how many people have been killed in the scandal. ...read more.