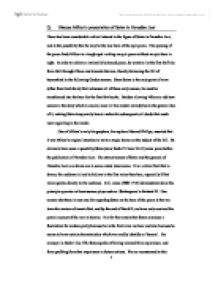 Q. Discuss Milton's presentation of Satan in Paradise Lost There has been considerable critical interest in the figure of Satan in Paradise Lost, and in the possibility that he may be the true hero of the epic poem. The opening of the poem finds Milton in a tough spot: writing an epic poem without an epic hero in sight. In order to achieve a rationally balanced poem, he wants to let the first half rise from h**l through Chaos and towards Heaven, thereby balancing the fall of humankind in the following Garden scenes. Since Satan is the only point of view (other than God above) that witnesses all of these early scenes, he must be transformed into the hero for the first few books. Besides allowing Milton to add new scenes to the story which is crucial, since all his readers already know the general idea of it, making Satan temporarily heroic makes his subsequent evil deeds that much more appalling to the reader. One of Milton's early biographers, his nephew Edward Phillips, asserted that it was Milton's original intention to write a tragic drama on the subject of the fall. He claims to have seen a speech by Satan (now Book IV lines 32-41) some years before the publication of Paradise Lost. The attractiveness of Satan and the genesis of Paradise Lost as a drama are to some extent interwoven. It is a critical fact that in drama, the audience is lead to believe in the first voice they hear, especially if that voice speaks directly to the audience. ...read more.

Furthermore, the poem shows us that Satan is perverse: he has defiantly turned away from his creator, forcefully asserting that he is 'self-begot, self-rais'd/by his own quick'ning power' (Book 5 lines 860-1). Thus while Milton's Satan is indeed theologically perverse, the early Books of the poem brilliantly enable us to feel his power and appeal. Paradise Lost is quite explicitly a poem intended to educate, as Milton declares at the beginning of the opening Book, where he asks for inspiration to 'assert eternal providence,/ And justify the ways of God to men' (lines 25-6). Part of the process of education is the rejection of the attractions of the satanic epic, and the exercising of judgement in recognising satanic heroism from its true counterpart. Never one to miss a chance for order and symmetry, Milton set bounds on Satan's tenure as hero that are as clear as the boundary set around his Eden. The two dramatic monologues that frame his long journey also delimit the part of the poem where the reader is encouraged to sympathize with him from the rest of it. The question that remains is, what specific devices does the poet use to elevate Satan as a character and then cast him down into 'a lower deep...to which h**l seems a Heaven,' i.e. despair? The monologue that inaugurates the reader's sympathy with Satan occurs just after he has mustered all his fallen troops. Though earlier speeches have paved the Period Pieces Imran Hussain way for this one, it is here that Satan's feeling for his 'associates and co-partners' seems most genuine. ...read more.

'All hope excluded thus,' Satan pronounces his own final doom by committing the only truly unforgivable sin, despair Thereafter, Satan becomes a thief, liar, and fraud in the metaphors of the poem, little more than a sheep rustler or wolf hopping a fence when he enters Eden (1536). He even lies to himself about his love for humankind and his motives in ruining them: 'public reason just / honor and empire with revenge enlarged...compels me now to do what else, though damned, I should abhor' (1541). Milton has made it through the most forbidding and lonesome scenes of the poem, and now has a wealth of characters available to take up the mantle of protagonist: Adam, Uriel, Gabriel, even the Son of God. Now that Satan has given up the last echoes of his angelic dignity and beauty and disappointed the reader by seeming to come so close to repenting of his folly and then giving up, Milton is free to Period Pieces Imran Hussain demote Satan to the role of trickster-villain despite his recent feats. This personal upset to the reader's trust and hope for the protagonist is vital to Milton's purpose; it engages the reader in an old story as well as serving in a technical way to get all the characters Milton needs to the proper places at the proper time in the narrative. The delicate way in which he holds the character of Satan poised between heroic and villainous acts during his physical ascent and spiritual fall makes use of the full gamut of poetic devices, including allusion, metaphor, hyperbole, diction, and more a tricky juggling act of character development, until he is ready to let the ball drop. ...read more.