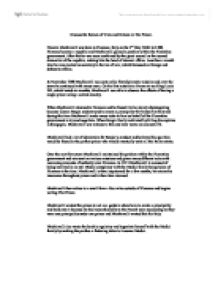 Discuss the themes of Virtu and Fortuna in The Prince

Discuss the themes of Virtu and Fortuna in The Prince. Niccolo Machiavelli was born in Florence, Italy on the 3rd May 1469. In 1498, Florence became a republic and Machiavelli gained a position within the Florentine government. After this he was soon confirmed by the great council as the second chancellor of the republic, making him the head of internal affairs. Less than a month later he was elected as secretary to the ten of war, which focussed on foreign and defensive affairs. In November 1498 Machiavelli was sent on his first diplomatic mission and over the years he continued with many more. On his first mission to France to see King Louis XII, which lasted six months, Machiavelli was able to observe the effects of having a single prince ruling a united country. When Machiavelli returned to Florence and he found it to be slowly disintegrating because Cesare Borgia endeavoured to create a principality for himself in Italy and during this time Machiavelli made many visits to him on behalf of the Florentine government to try and negotiate. When Borgia finally retaliated by killing his captains in Sinigaglia, Machiavelli was witness to this and later wrote an account of it. Machiavelli had a lot of admiration for Borgia's conduct and believed his qualities would be found in the perfect prince who would eventually unite all the Italian states. ...read more.

Machievelli describes virtues as qualities in a person that a praised by others these can be things such as generosity and compassion etc. He states that a prince should always try to appear virtuous although by acting virtuously for virtue's sake can prove to be damaging to the principality. A prince shouldn't always avoid things such as cruelty or dishonesty if he thinks they are beneficial to the state but they should not be pursued just for their own sake just as virtue shouldn't. Every action a prince chooses to make should be considered firstly as to how it will affect the state and not just for it's moral value. Machiavelli's conception of virtue is quite different to those of earlier theorists such as Aristotle. He defined virtue as being related to something good where as Machiavelli defines it more simply as something the receives praise from others, therefore, both cruelty and generosity can be virtue's if they are both praised by others. Machiavelli said that a prince is able to learn to become virtuous by simply looking at the study of warfare and how people are able to win battle through planning and strategy rather than by luck, he also says princes can learn a lot from past rulers who have both succeeded and failed as he to learn from their mistakes and gain knowledge from their success's. ...read more.

Overall Machiavelli believed that both virtu and fortuna are characteristics which needed in order to be a successful prince because virtu is needed to control the fortuna and fortuna is needed to help you stay in power but you shouldn't rely on it completely. For example, the sea is much more powerful than boat, so it would be better for us to work and building a good boat rather than to sit and shout at the waves. However, when the sea becomes calm it is harmless to our boat but when it is in full fury it cannot be overcome. So by making our ship strong, it is able to protect us from the dangers of the sea and carry us far when the winds are favourable. The Prince is a very practical and clever book as it does not tell its reader what an ideal prince or principality is but it simply explains what actions and qualities have enabled past princes to best rule a principality. And also the book has visions of wanting to unite Italy, which is an idea 350 years ahead of its time. When Machiavelli wrote this book it was write for the time as there were frequent wars and some advice on the art of war was needed. Even though, in many cases, Machiavelli's the Prince is still relevant today particularly in government, as if you want to succeed and gain power in it, you need to be ruthless and corrupted. ...read more.