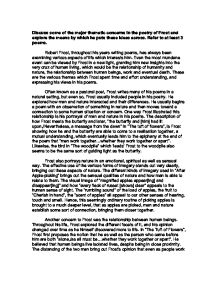 Discuss some of the major thematic concerns in the poetry of Frost and explore the means by which he puts these ideas across.

Discuss some of the major thematic concerns in the poetry of Frost and explore the means by which he puts these ideas across. Refer to at least 3 poems. Robert Frost, throughout his years writing poems, has always been examining various aspects of life which interests him. Even the most mundane event can be viewed by Frost in a new light, granting him new insights into the very cruz of human living, which would be the relationship of humanity and nature, the relationship between human beings, work and eventual death. These are the various themes which Frost spent time and effort understanding, and expressing his views in his poems. Often known as a pastoral poet, Frost writes many of his poems in a natural setting, but even so, Frost usually included people in his poetry. He explored how man and nature interacted and their differences. He usually begins a poem with an observation of something in nature and then moves toward a connection to some human situation or concern. One way Frost illustrated this relationship is his portrayal of man and nature in his poems. ...read more.

Hence, this seemingly ordinary routine of picking apples is brought to a much deeper level, that as apples are picked, man and nature establish some sort of connection, bringing them closer together. Another concern to Frost was the relationship between human beings. Throughout his life, Frost explored the different facets of it, and his opinion changed over time as he himself discovered more to life. In "The Tuft of Flowers", Frost first proposes the notion that he as well as the person who came before him are both "alone,/as all must be...whether they work together or apart". He believed that human beings live isolated lives, despite being in close proximity. The distancing of the two men bring out Frost's opinion that even as people work near together or apart, they are alone, separate entities doing their own work. Likewise, in "Mending Wall", Frost also wrote that "We keep the wall between us as we go" and "Good fences make good neighbours", once again highlighting his point that human beings live in isolation. Another way which Frost views human relations is that he thinks that though humans are separated as individuals, we are social beings and have that spiritual bond with other human beings. ...read more.

spirit to [their] own", which is the invisible presence of the men who have came to do the same work before them. Frost also expresses another opinion of work, which is that he believes in the value of hard work, as he so aptly expresses in his sonnet "Mowing", that "the fact is the sweetest dream that labour knows". The pleasure at the result of hard work is what should be looked forward to. Finally, Frost also looked at the idea that all life has its end and also realises the mortality of man. In "After Apple-picking", Frost expressed this view that "for [he] had too much/Of apple-picking: [he] is overtired". He understands and is aware of the "long sleep" - death, which will eventually come. It shows the maturity of a man who apprehends the cycle of life and death of this world. He does not want to leave before his work half-done though and writes in his poem "Birches" that "may no fate...half grant what I wish and s****h me away/Not to return". Frost in this sense also recognizes the value of productive living before he is taken away by death. ...read more.