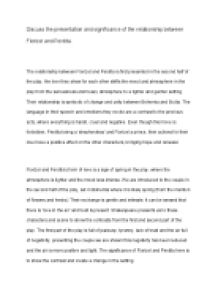 Discuss the presentation and significance of the relationship between Florizel and Perdita.

﻿Discuss the presentation and significance of the relationship between Florizel and Perdita. The relationship between Florizel and Perdita is first presented in the second half of the play, the love they show for each other shifts the mood and atmosphere in the play from the seriousness and heavy atmosphere to a lighter and gentler setting. Their relationship is symbolic of change and unity between Bohemia and Sicilia. The language in their speech and emotions they evoke are a contrast to the previous acts, where everything is harsh, cruel and negative. Even though their love is forbidden, Perdita being a ?shepherdess? and Florizel a prince, their actions for their love have a positive effect on the other characters, bringing hope and renewal. Florizel and Perdita?s form of love is a sign of spring in the play, where the atmosphere is lighter and the mood less intense. We are introduced to the couple in the second half of the play, set in Bohemia where it is likely spring (from the mention of flowers and herbs.) ...read more.

The action of Florizel and Perdita is also seen to show the contrast of the two parts of the play. Whenever we are presented Florizel and Perdita, the two act like how a couple destined for each other would act. Florizel is first shown to be consumed by love, complimenting Perdita, saying her beauty rivals that of the goddess ?Flora.? Even when his father threatens to disinherit him, Florizel remains faithful. He tells Perdita that their love ?cannot fail, but by / Violation of my faith?, and this will not happen. It is clear Florizel acts towards his love in a reasonable manner. Leontes, on the other hand, accuses Hermione saying that ?she?s an adultress,? calling her names and even taking away her humanity describing as a ?thing? and ?creature?.? Even though it is understandable that he does this because of his anger towards her ?affair,? his outcome and his action towards it is unreasonable and exaggerated. The first part of the play is clearly full of accusations, jealous, imprisonment and lack of trust from Leontes, while in the second half, it is full of faithfulness, protection, trust and compliments from Florizel. ...read more.

Leontes, whose been suffering in Sicilia and mourning for the loss of his queen and son for sixteen long years suggests that Florizel and Perdita?s presence is like the arrival of spring after a long, cold, harsh winter, bringing renewal and regeneration. The youthful spirit in Florizel and Perdita has quite an impact on the other characters in the play. As we know, the older generation (especially Leontes and Polixenes) in ?The Winter?s Tale? is responsible for all the suffering and broken relationships in the play. When Florizel and Perdita fall in love and run away from Bohemia to the Sicilian court, their actions have the effect of restoring broken families, mending old friendships, and reigniting hope for the future. The youths are said to have the power of unity and is symbolic of renewal, regeneration and replenishment. In conclusion, the relationship of Florizel and Perdita is presented in a positive idea where everything is softer and gentle; this idea is used to show the contrasts between the two parts of the play. Their relationship is also significant in the development of themes, especially in change and renewal. Their actions for their relationship affects the other characters positively and brings a sense of hope for the future. ...read more.