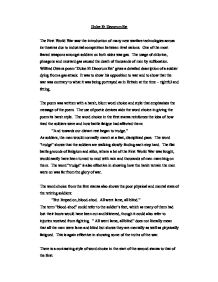 Dulce Et Decorum Est The First World War saw the introduction of many new warfare technologies across its theatres due to industrial competition between rival nations. One of the most feared weapons amongst soldiers on both sides was gas. The usage of chlorine, phosgene and mustard gas caused the death of thousands of men by suffocation. Wilfred Owens poem 'Dulce Et Decorum Est' gives a detailed description of a soldier dying from a gas attack. It was to show his opposition to war and to show that the war was contrary to what it was being portrayed as in Britain at the time - rightful and fitting. The poem was written with a harsh, blunt word choice and style that emphasises the message of the poem. The use of poetic devices aids the word choice in giving the poem its harsh style. The word choice in the first stanza reinforces the idea of how tired the soldiers were and how battle fatigue had affected them: "And towards our distant rest began to trudge." ...read more.

The words "fire" and "lime" convey a similar idea of burning - a property of mustard and chlorine gas. Having inhaled the green gas the man's lungs would be dissolving and he would effectively be drowning in his own body fluids: "As under a green sea, I saw him drowning." "He plunges at me, guttering, choking, drowning." The harsh, almost un-poetic use of words is very effective in emphasising the horrors of the war. In the last stanza the word choice remains sombre, blunt and realistic: "His hanging face, like a devil's sick of sin; If you could hear, at every jolt, the blood Come gurgling from the froth-corrupted lungs." This usage of words contributes greatly to the power of the poems effect on the reader, emphasising Wilfred Owens's morals and the message of the poem. The strong word choice is further reinforced by the usage of poetic devices throughout the poem. In the first stanza the usage of similes aids the word choice in showing how the soldiers were affected both physically and mentally by ...read more.

In the last stanza the simile "like a devil's sick of sin" shows that even the devil would be sickened by the death of the man. Wilfred Owens' blunt but strong word choice, reinforced by the usage of poetic devices gives a powerful image of a scene from a First World War, as well as showing how the war affected the soldiers that fought in. This is done in order to show his opposition to the war. His opinions are emphasised in the final lines of the poem: "My friend you would not tell with such high zest To children ardent for some desperate glory, The old lie: Dulce Et Decorum Est Pro Patria Mori." Dulce Et Decorum Est Pro Patria Mori - it is rightful and fitting to die for one's country - the author says is a lie. The harsh realistic style in which the poem was written would convince many readers to agree, meaning his usage of words and poetic devices are very effective. However the poem could also be portrayed as unpatriotic as it denounces the causes of his country fighting the war. ...read more.