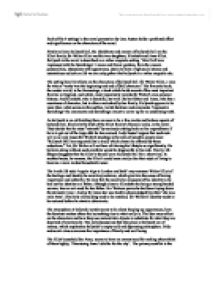 Each of the 4 settings in the novel persuasion by Jane Austen holds a profound effect and significance on the characters of the novel. Firstly we have kellynch hall

Each of the 4 settings in the novel persuasion by Jane Austen holds a profound effect and significance on the characters of the novel. Firstly we have kellynch hall, the inhabitants and owners of kellynch hall are the Elliot family, Sir Walter Elliot and his two daughters, Elizabeth and Anne Elliot. Kellynch in the novel is described as a rather exquisite setting, 'Mrs Croft was impressed with the furnishings'. Lawns and flower gardens, from the owners personalities, obsessions with appearance, desire to have a high social stance and ostentatious outlook on life we can only gather that kellynch is a rather exquisite site. The setting heavily reflects on the characters of kellynch hall- Sir Walter Elliot, a man for whom "vanity was the beginning and end of [his] character." His favourite book, the reader is told, is the Baronetage, a book which holds record of the most important families in England, and which, most importantly records Sir Walter's own personal history, And Elizabeth, who is beautiful, yet vain like her father and Anne, who has a sweetness of character, but is often overlooked by her family. Kellynch appears to be more then what seems on the surface, lavish furniture and ornaments 'impressive furnishings' the ornaments and furnishings almost to cover up for an underlying truth. As kellynch is an old building there are sure to be a few cracks and broken aspects of kellynch hall. ...read more.

Austen contrasts the traits of various characters in these chapters. In the conversation with the Crofts, the differences between Admiral Croft and Sir Walter Elliot become evident. Admiral Croft thinks it silly to have so many mirrors constantly around him in the dressing room. He is a man of relatively simple tastes, and his comments allow the reader to see the silliness and vanity of Sir Walter. In contrast to the emptiness and masquerades of kellynch we have Uppercross - the great house. The scenes at Uppercross are described as homely and comfortable. 'Friendly and hospitable' At Uppercross, Anne notices the very different topics that occupy the Musgrove's' attention. Little concerned with discussing appearances and social standing, the Musgrove family occupies itself with hunting, newspapers, house-keeping, dress, dancing, and music. She finds their presence a welcome change from the company of her father and Elizabeth. This emphasise the point regarding how at kellynch material aspects of life substitute for the real emotional importance of family and friends - as Uppercross are happy as a family they need not discuss irrelevant things. Anne enjoys the Musgrove's' company, but does not wish to emulate them; her taste seeks more education and more elegance. Though Anne finds both of these qualities in her own family, she dislikes their close-minded elitism. Uppercross through out the novel suffer a tragedy - Louisa during her visit to lyme injures herself, regardless of this once she is 'strong enough to hold her head up' the strong contrast between the Musgrove house that they now see and the one of a few weeks ago. ...read more.