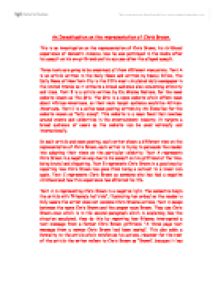 English Language AS Representation Coursework. This is an investigation on the representation of Chris Brown, his childhood experience of domestic violence, how he was portrayed in the media after his assault on his ex-girlfriend and his success after th

An Investigation on the representation of Chris Brown. This is an investigation on the representation of Chris Brown, his childhood experience of domestic violence, how he was portrayed in the media after his assault on his ex-girlfriend and his success after the alleged assault. Three texts are going to be examined, all from different view points. Text A is an article written in the Daily News and written by Nancy Dillion. The Daily News of New York City is the fifth most circulated daily newspaper in the United States so it attracts a broad audience also concerning ethnicity and class. Text B is a article written by Kia Miakka Natisse, for the news website known as The Grio. The Grio is a news website which offers news about African-Americans, so their main target audience would be African-Americans. Text C is a online news posting written by Ani Esmailian for the website known as "holly scoop". This website is a news feed that revolves around events and celebrities in the entertainment industry. It targets a broad audience of users as the website can be used nationally and internationally. In each article and news posting, each writer shows a different view on the representation of Chris Brown, each writer is trying to persuade the reader into adopting their views on the particular celebrity. Text A represents Chris Brown in a negative way due to his assault on his girlfriend at the time, being brutal and disgusting. ...read more.

This sentence also includes a possessive adjective, "our" to reinforce their group trait in which the writer has used so the target audience has a stronger sense of belonging and can relate to the black community. It a positive representation of Chris Brown as it ends the article with "talent trumps all" which is alliterative which means that The Grio and the African-American community will stand by Chris Brown as long as he does his job to the best of his ability. Text C refers to him as, Chris Brown and Chris. This shows a greater sense of informality and that the article is comfortable in what it is reporting. It also shows that the article is representing him in a friendly manner, "Chris gave a very candid interview". The adjective "candid" is used to represent Chris Brown in a good way and show that he is straight to the point and a very honest and fair male. Text A uses as many ways as possible to demean Chris Brown and to represent him in a negative way. It uses the past participle "fought" in the sentence, "Desperate to survive, Rihanna fought back". This shows that Rihanna had to literally fight for her life but no matter how hard she tried, "Brown" was always one step ahead of her. It makes use of the adjective desperate which indicates how driven Rihanna was to survive, she had to physically work to get to where she is today. ...read more.

It swaps in-between compound sentences and complex, such as "His third album, released shortly after the incident, sold a paltry 339,000 units". Text C has a more sympathetic view towards Chris Brown, as it takes his family's past into consideration. This article has a lot more adjectives used by the writer to more or less describe things which may have seemed unclear at first. Adjectives such as "candid, terrified and b****y". It also explained things that happened beforehand which the writer makes use of a past participle which is "suffered". This article is split into paragraphs which contain mostly complex sentences as it gives a lot of information then closes to release the next set of information. The modal of ability "could" is used in the context "his supposed attack could have been served as a trigger for his outburst". The three texts use similar methods of representing Chris Brown in the way they feel best such as making certain things stand out and exploiting some words to the reality of the situation. Text A is heavily biased towards Chris Brown. All three texts are trying to present representations of Chris Brown, Text A being a negative representation, Text B being mutual representation of Chris brown, as its neither negative or positive and Text C which supports Chris Brown due to his childhood background which gives a positive representation of Chris Brown. ?? ?? ?? ?? ...read more.