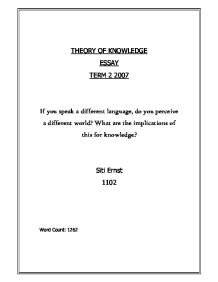 THEORY OF KNOWLEDGE ESSAY TERM 2 2007 If you speak a different language, do you perceive a different world? What are the implications of this for knowledge? Siti Ernst 1102 Word Count: 1262 Language, in simplified thought, is communication of any kind between living matters. The world is like an Amazon of languages. So rich and diverse in detail each language being unique and one of a kind. The hypothesis of linguistic relativity which says, 'It has been suggested that the particular language we speak causes us to think in a certain way'1 is a clear indicator that there are implications of language on knowledge. Furthermore, 'speakers of different languages consequently perceive the world quite differently'2. There is profound belief (even though the hypothesis of linguistic relativity should be seen critically due to little research) that if one speaks a different language (whatever form it may be) one perceives a different world. There are several and diversifying implications of this for knowledge because knowledge varies with language. Language is a broad topic and therefore requires a broad spectrum of investigation. What is a different language? Is it sufficient to answer this by saying that English and French are different languages? ...read more.

As a student this is seen day after day, in Geography class "work" is related to terms such as labour and employment but going into Physics class "work" depicts a totally different meaning which has been suited to Physics. In Physics terms "work" is related to words such as displacement, energy and force and used in a totally different context. In a similar way Maths, Information Technology and Music use language which is unique to their cause. So depending on the context of language use, different perception is made in relation to it. A Physicist and a Geographer would certainly have difficulty conversing if they were to convert following the perceptions gained from their area of knowledge. Language though is not always verbal and sometimes the amount of information that body language and expression can convey is underestimated. Body language often occurs subconsciously and therefore it is often taken for granted. Certain body language, just like verbal language, is unique to certain cultures. For example, in Fiji body language is uniquely used as raising the eyebrows to someone simply represents "Yes" but imagine raising the eyebrows to someone in a European country especially say a man to a woman. The woman is likely to think that the man had not the best intentions when doing so. ...read more.

Semantics is another very interesting dimension of language. Language is all good and well but it in actual fact it is the meaning behind words, signs, reactions that makes language effective. It is true that no two people are alike because 'every individuals experience is unique.'3 Therefore, no two people will have the same perception of words since they have built up their perceptions from varying experiences and will perceive language differently. The famous Odgen and Richards Triangle, which has the Symbol and Referent at the bottom corners and the Reference as the apex, shows how easily miscommunication can take place because of two people carrying different perceptions of words. By speaking different languages in all kinds of forms one perceives a different world because of the diverse denotations associated with different languages and the link of a language, spoken by a group, to their culture, environment and religion. There are broader aspects of language which cause one to perceive the world different because of the different context and usage of language in some areas of knowledge whereas other areas of knowledge have a language of their own in a way. Ultimately it is the reference in language that is the key to finding the same perception to things and perceiving the world in a similar way. ...read more.