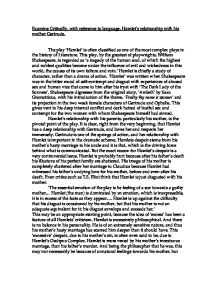 Examine Critically, with reference to language, Hamlet's relationship with his mother Gertrude.

Examine Critically, with reference to language, Hamlet's relationship with his mother Gertrude. The play 'Hamlet' is often classified as one of the most complex plays in the history of Literature. This play, by the greatest of playwrights, William Shakespeare, is regarded as 'a tragedy of the human soul, of which the highest and noblest qualities become under the influence of evil and wickedness in this world, the causes of its own failure and ruin.' Hamlet is chiefly a study of character, rather than a drama of action. 'Hamlet' was written when Shakespeare was in the bitter mood of self-contempt and disgust with experiences of abused s*x and human vice that came to him after his tryst with 'The Dark Lady of the Sonnets'. Shakespeare digresses from the original story, 'Amleth' by Saxo Gramatticus, with his introduction of the theme, 'Frailty thy name is woman' and its projection in the two weak female characters of Gertrude and Ophelia. This gives vent to his deep internal conflict and dark hatred of lustful s*x and contempt for the two women with whom Shakespeare himself had sinned. Hamlet's relationship with his parents, particularly his mother, is the pivotal point of the play. It is clear, right from the very beginning, that Hamlet has a deep relationship with Gertrude, and loves her and respects her immensely. ...read more.

He seems to forget that she is his mother, who has given birth to him, raised him, and showered him with love. And she deserves a certain degree of respect from her son. However, despite everything, Hamlet's emotional struggles with Human Nature and his shattered illusions, he has not lost love for either of his parents, as reflected in the goals of this scene. When the ghost reappears, Hamlet treats it with respect and humble submission. But, even though he loves his mother, in his heart, he has no respect for her. As he states, "I must be cruel only to be kind". His strong words help express his own feelings of rage, and in addition, help Gertrude realize her sin and lead her towards repentance. After his periods of bitterness, anger and fear he realizes that she finally understands his message about her actions, Claudius, and his own assumed madness. His tone then changes from one of bitterness and rage to one of almost priestly counsel as he explains to her how to remedy the situation. Gertrude is described as a frail character, which lacks feeling. She is of an insensitive nature, not likely to be troubled by guilt. A placid nature, even stolid, she cannot rise high. ...read more.

His conscience does not permit him to kill Claudius without being sure that Claudius is responsible for King Hamlet's regicide. So he waits to kill Claudius only after he is sure Claudius is guilty, after the play-within-the-play. Shakespeare also employs several motifs to enrich the theme of morality. One of these is sickness and disease. He compares Gertrude's sin to a disease or ulcer, which will subtly rot her soul if she ignores it. As he says "will but skin and film the ulcerous place, While ranks corruption, mining all within, infects unseen". A similar motif is the image of the "unweeded garden" in his first soliloquy. Hamlet sees the world, filled with sinful people as an unweeded garden. The connections with Denmark being corrupted and diseased are metaphorical for Gertrude's relationship with Claudius, incestuous and corrupted. Hamlet is the most realistic character Shakespeare ever created. His relationship with his mother was extremely natural, in the fact that it experienced certain abnormalities, as in the case of all relationships. Their love for each other is painful, but ultimately helps them grow as people and fulfill their obligations- Hamlet's duty to avenge his father's death and Gertrude's duty to repent and try to protect her son from himself and those around him. Hamlet was merely a man, with motives unknown to him, with secret agendas and internal conflicts that remain unresolved. ...read more.