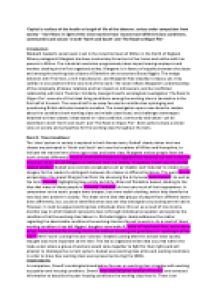 Examine how classes have different class conditions, communities and values in both North and South and The Road to Wigan Pier

Transfer-Encoding: chunked ﻿?Capital is reckless of the health or length of life of the labourer, unless under compulsion from society? ? Karl Marx: In light of this view examine how ?classes have different class conditions, communities and values? in both ?North and South? and ?The Road to Wigan Pier? Introduction: Elizabeth Gaskell?s social novel is set in the industrial town of Milton in the North of England. Where protagonist Margaret has been involuntary forced out of her home and settles with her parents in Milton. The industrial revolution progressively takes impact leaving employers and workers clashing in the first organised strikes. Margaret is in favour of equality between the classe and among the working class citizens of Darkshire she encounters Bessy Higgins. The wedge between John Thornton, a mill manufacturer, and Margaret Hale steadily increases, yet, they confide in one another till the very end of the novel. The novel reflects Margaret?s understanding of the complexity of labour relations and her impact on mill owners, and her conflicted relationship with John Thornton. Similarly, George Orwell?s sociological investigation ?The Road to Wigan Pier? accounts of the bleak living conditions among the working class in Lancashire in the first half of his work. The second half is an essay focused on middle-class upbringing and questioning British attitudes towards socialism. The investigation opens new ideas for readers about the conditions both working class and middle class faced, and challenges stereotypes attached to these classes. Ideas based on ?class condition, community and values? can be identified in both ?North and South? and ?The Road to Wigan Pier?. Both authors share a similar view on society and sympathise for the working class throughout the texts. ...read more.

Having ?faith? not in religion but the ?union? was as ironic at the time. This was because the Church of England was very powerful during the 1800s. Religion affected the behaviour of ordinary people and had great influence over people?s life, yet, at the same time, the first seeds of doubt were sown. Working class weren?t usually very religious hence having faith in something socially constructed as the ?union? helped form a strong working class community. Those striking hold a great emphasis of faith hoping they will change and challenge the current system. This educates the audience that the working class had a strong community in the late 1800s as most individuals faced the same situation and would come together to form one solution. However, modern readers may respond with shock. Individuals within society today are aware of the vast amount of help available for those who need it such as occupational centres for unemployed citizens. COMPARISON Orwell focuses on the different subcultures formed within the working class community. Orwell investigates the different groups and explains why an individual cannot be place themselves in a category, but, groups of people can be categorised into different sectors from society based on judgements on occupation, values and dialect. The working class community is fragmented with many subcultures involved. Some employed, some unemployed, leaving some with basic literacy skills whilst other have none. Orwell has meets a few people who have acquired the ability to succeed with their righteous educational background ?to meet unemployed men of genuine literary ability? was considered rare at the time. ?Genuine literary ability? refers the skill set as well as mind set for the love of learning. ...read more.

‘The average gross earning per week is £2 15s. 2d’, coal mining is a dangerous industry with a ‘little under than 1,300 being killed every year’ ‘and one in six being injured’. Although the figures show the danger of being a coal miner, employment has improved the lives of many as well as their standards of living. Brooke’s essay focuses on employment being beneficial In Britain during the 1950s, working class living standards were undeniably improved by full employment and comprehensive welfare provision (Brooke, 2001). As a result of this those employed from a working class background value their jobs. Values differ to both working and middle class civilians. Society enable people to believe their values despite not changing much, an example of this is the continuous strikes that members of the working class community had held against their trade union. Both authors clearly explore how values were represented in society during two different time periods. In the 1800s people valued their image mostly middle class citizens valued this. In comparison to working class in the late 1900s wanted a job in order to provide food over the table. Conclusion: Class conditions, community and values are explored similarly in both texts. Both Orwell and Gaskell clearly show how classes are represented through two different time periods and illustrate how society would perceive the working class and the middle class. Class is a dominant theme in both texts and overlap with the two other subject matters of this essay. Both writers briefly talk about communities and values and how these are formed through class backgrounds. For example a working class community will share similar values in comparison to a middle class community having different values. Both writers clearly focus on how class shapes individuals and what their position is in society with their beliefs and values and the community they belong in. ...read more.