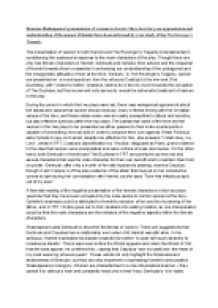 Examine Shakespeares presentation of women in Hamlet. Show how far your appreciation and understanding of this aspect of Hamlet have been informed by your study of the The Revengers Tragedy.

﻿Examine Shakespeare?s presentation of women in Hamlet. Show how far your appreciation and understanding of this aspect of Hamlet have been informed by your study of the The Revenger?s Tragedy. The presentation of women in both Hamlet and The Revenger?s Tragedy is fundamental in conditioning the audience?s response to the main characters of the play. Though there are only two female characters in Hamlet, Gertrude and Ophelia, their actions and the response of Hamlet towards them is essential in enhancing our understanding of the protagonist and the misogynistic attitudes of men at the time. Similarly, in The Revenger?s Tragedy, women are presented on a moral spectrum from the virtuous (Castiza) to the immoral (The Duchess), with Vindice?s mother, Gratiana, seems for a time to move towards the corruption of The Duchess, but this movement only serves to reveal the schematic treatment of women in the play. During the period in which the two plays were set, there was widespread agreement about the ideals and values that women should embody, many of these linking with the Christian values of the time, and these ideals made women easily susceptible to attack and scrutiny, but also effective symbols within the two plays. ...read more.

In his soliloquy, Hamlet expresses his disdain towards his mother ?to post with such dexterity to incestuous sheets?. This is said even before the Ghost appears and when the Ghost of Old Hamlet does appear, he confirms this ? saying that Claudius ?won by lustful sin, the heart of my most seeming virtuous queen?. These words not only highlight the fickleness and shallowness of Gertrude, but they are also important in expressing Hamlet?s and possibly Shakespeare?s misogyny. Women are characterized in a one dimensional manner ? they cannot live without a man and constantly need one in their lives. Gertrude?s ?o?er hasty marriage? to Claudius exemplifies this. Gertrude?s passivity in action is what allows her to be dominated and controlled by the men in her life, but she is also somewhat ignorant and oblivious to her surroundings. According to Hamlet, she played the part of the grieving widow well ? ?she followed my poor father?s body, like Niobe, all tears?. However, Gertrude?s redeeming feature is her propensity for goodness. She is by no means calculating ? unlike her husband and indeed her son. ...read more.

Women are in many ways given a paradoxical role within both Hamlet and TRT. The women of Shakespeare?s Hamlet are characterised as weak and ineffectual. They submit to their male counterparts and are led by them. Both Ophelia and Gertrude are fiercely obedient, as they are controlled by the men in their lives. They play passive roles in the play, but are key to exposing the titular character?s distorted view of a woman. Hamlet speaks of the deceptive nature of women, but must also trust his mother not to reveal his feigned madness to Claudius. One explanation for Hamlet?s madness in the play is his offence in Gertrude?s marriage to Claudius, whom he doesn?t view as an adequate father. In TRT, Vindice speaks endlessly of the immorality of women, of The Duchess ?That will do with the devil?. On the other hand, female virtue is the essential justification for his revenge. He must in the virtue of Gloriana or be utterly lost. In order to believe in Gloriana, he must also believe in the chastity of his sister. ...read more.