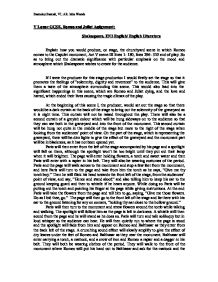 Explain how you would produce, on stage, the churchyard scene in which Romeo comes to the Capulet monument, Act V scene III lines 1- 180, lines 296- 310 end of play.

V Lower GCSE, Romeo and Juliet Assignment: Shakespeare. EN2 English/ English Literature Explain how you would produce, on stage, the churchyard scene in which Romeo comes to the Capulet monument, Act V scene III lines 1- 180, lines 296- 310 end of play. So as to bring out the dramatic significance with particular emphasis on the mood and atmosphere which Shakespeare wishes to create for the audience. If I were the producer for this stage production I would firstly set the stage so that it promotes the feelings of "solemnity, dignity and reverence" to the audience. This will give them a taste of the atmosphere surrounding this scene. This would also lead into the significant happenings in this scene, which are Romeo and Juliet dying, and the love and hatred, which ended their lives causing the tragic climax of the play. At the beginning of this scene I, the producer, would set out the stage so that there would be a dark curtain at the back of the stage to bring out the solemnity of the graveyard as it is night time. This curtain will not be raised throughout the play. There will also be a second curtain of a greyish colour which will be hung sideways on to the audience so that they can see both in the graveyard and into the front of the monument. This second curtain will be hung not quite in the middle of the stage but more to the right of the stage when looking from the audiences' point of view. On the part of the stage, which is representing the graveyard, there will be dim lights to give the effect of the graveyard and the monument part will be in blackness, as it has not been opened yet. ...read more.

They will fight near the opening to the vault, moving from side to side of the stage and slightly out of the door and back in. A big spotlight will be following them across stage, and dramatic music will play as they fight. A second, smaller spotlight will appear for a moment as the page speaks after seeing them fight and stands then runs off stage to the left to find the watch taking with him the lamp. Paris is slain at the entrance to the monument and both the rapiers are dropped as later in the play Friar Lawrence find their rapiers, "what blood is this which stains the stony entrance of this sepulchre" "gory swords". Romeo then kneels down over Paris and listens to his last words, showing tenderness around him. Then will pull back suddenly with shock and gasps as he realises it is Paris, Juliet's husband to be that he has slain, "Mercutio's kinsman, noble County Paris" A reconciliation even in death is shown now as Romeo drags Paris under his arms to Juliet to lay him next to her as he asked. At this point Romeo will drag Paris off to the right of the stage in the direction of Juliet and curtain separating the monument and graveyard is pulled, slowly to the left of the stage as Romeo is dragging Paris only leaving a small part of the stage, to the left, showing the graveyard outside the monument. The movement of the curtain at the same time as Romeo drags Paris gives the effect that Romeo is walking further into the monument. A slab will be wheeled on at the same time and this will have Juliet on top. ...read more.

Then over the next few minutes the watchmen will return with Balthasar, Friar Lawrence, Prince and attendants, Capulet and Lady Capulet and Montague. The truth is revealed about Romeo and Juliet's love, how Paris was just unfortunate to become caught up in the middle and how they sacrificed their lives to be together. Then at the very end the heads of the two houses realise that it was their rancour that killed their children and so they stop the feud and are reconciled. To show this they will shake hands with both hands while saying how they will announce their reconciliation, by erecting pure gold statues of the child of the opposite household to honour them. The prince will then walk up to them both and stand between them and place both his hands over theirs as if to seal the friendship as he concludes the act and the play, summing up the ending as, "A glooming peace," The reconciliation at the end of this play I think leaves the audience relieved as they know that some good had come out of Romeo and Juliet's death and that they didn't die in vain. Although it will also leave them feeling sad as they lost their lives due to their families feud. I think Shakespeare wrote this play to show how naive and immature people could be; fighting over insignificant things and not realising how their actions affect others. In this play we see two members of two different households too stubborn and ignorant to see the love, which eventually, will both seal their friendship and ruin their families. I also think it showed that in some ways love does indeed conquer all. Barnaley Baruah, VL AR. Mrs Woods ...read more.