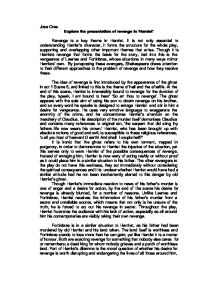 Explore the presentation of revenge in 'Hamlet'.

Jose Cree Explore the presentation of revenge in 'Hamlet' Revenge is a key theme in Hamlet. It is not only essential to understanding Hamlet's character, it forms the structure for the whole play, supporting and overlapping other important themes that arise. Though it is Hamlets revenge that forms the basis for the story, tied into this is the vengeance of Laertes and Fortinbras, whose situations in many ways mirror Hamlets' own. By juxtaposing these avengers, Shakespeare draws attention to their different approaches to the problem of revenge and how they resolve these. The idea of revenge is first introduced by the appearance of the ghost in act 1 Scene 5, and linked to this is the theme of h**l and the afterlife. At the end of this scene, Hamlet is irreversibly bound to revenge for the duration of the play, 'speak, I am bound to hear' 'So art thou to revenge'. The ghost appears with the sole aim of using his son to obtain revenge on his brother, and so every word he speaks is designed to enrage Hamlet and stir in him a desire for vengeance. He uses very emotive language to exaggerate the enormity of the crime, and he concentrates Hamlet's attention on the treachery of Claudius. His description of the murder itself demonises Claudius and contains many references to original sin, 'the serpent that did sting thy fathers life now wears his crown.' ...read more.

However, the other problem which religion creates is that of Hamlets own afterlife. If murder for revenge is wrong then by killing Claudius, Hamlet condemns his own soul along with that of Claudius'. On the other hand, Hamlet is honour bound to exact revenge for his father's murder, and the consequences of not doing so could be even more drastic. Even suicide offers no solution, as 'the dread of something after death, the undiscovered country from whose bourn no traveller returns, puzzles the will, and makes us rather bear those ills we have than fly to others we know not of'. Hamlets indecisiveness is not just a result of his uncertainty about the consequences his actions will have. He is in emotional turmoil at this point in the play, and is feeling betrayed and rejected by those whom he had relied on so far in his life. His anger and frustration at his mother's behaviour is amplified by her lack of grief, and his desire for revenge at the start of the play is mainly fuelled by his own grief and a sense of injustice. His anger towards Claudius diminishes, as he is distracted form revenge by more immediate concerns, such as his relationships with Ophelia and with his mother. Part of Hamlets feelings of isolation stem from what he sees as betrayal by his friends, Rosencrantz and Guildenstern, and his lover Ophelia. ...read more.

Hamlet succeeded in taking revenge on Claudius and revealing the truth about his character, and Laertes succeeded in killing Hamlet but died in the process. All this clears the way for Fortinbras, who we see is far more suited to leadership than the indecisive Hamlet. Fortinbras was more successful in his revenge than Hamlet and Laertes for a number of reasons. He is not held back by the dilemma that freezes Hamlet; of having to choose between betraying his fathers trust or losing the throne and alienating everyone he loves. Hamlet is held back by his proximity to Claudius and the situation, whereas Fortinbras is free to act uninfluenced by the people around him. Another factor in Fortinbras' favour is that, unlike both Hamlet and Laertes, Fortinbras made the decision to take revenge alone, so it was entirely his responsibility. Revenge has to be nurtured in Hamlet and Laertes, and both are used as tools in the ongoing feud between the two brothers. Fortinbras is a man of action, and doesn't waste time pondering the philosophy behind the revenge mentality, as Hamlet does. And unlike Laertes, he plans and organises his revenge, he doesn't rush straight into confrontation unprepared. In fact, he represents the best qualities of both of them, so it is fitting that it is he who emerges with not only his life, but the throne of Denmark to go with it. ...read more.

In places this is an excellent essay. It is well written, logically structured and remains focused on the question throughout. The writer has included social and historical context and shows an awareness of the author's craft and dramatic techniques used. Where the writer uses PEA (Point, Evidence, Analysis) and supports perceptive comments with references to the play this essay is very good. However the essay sometimes falls into the trap of merely summarising plot developments and character's actions/feelings without any quotes. This is an intelligent and perceptive essay.