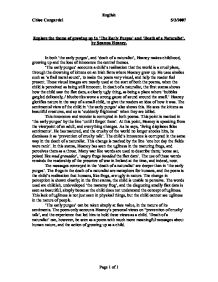 Explore the theme of growing up in 'The Early Purges' and 'Death of a Naturalist', by Seamus Heaney.

Explore the theme of growing up in 'The Early Purges' and 'Death of a Naturalist', by Seamus Heaney. In both 'the early purges', and 'death of a naturalist', Heaney makes childhood, growing up and the loss of innocence the central themes. 'The early purges' accounts a child's realization that the world is a cruel place, through the drowning of kittens on an Irish farm where Heaney grew up. He uses similes such as 'a frail metal sound', to make the poem very visual, and help the reader feel present. These visual images are mostly used at the start of both the poems, when the child is perceived as being still innocent. ...read more.

This innocence and wonder is corrupted in both poems. This point is marked in 'the early purges' by the line 'until I forgot them'. At this point, Heaney is speaking from the viewpoint of an adult, and everything changes. As he says, 'living displaces false sentiments'. He has matured, and the cruelty of the world no longer shocks him, he dismisses it as 'prevention of cruelty talk'. The child's innocence is corrupted in the same way in the death of a naturalist. This change is marked by the line 'one hot day the fields were rank'. In this stanza, Heaney has seen the ugliness in the maturing frogs, and perceives them as a threat. ...read more.

The change in perception is shown clearly; in the first stanza, the child is unable to perceive. The words used are childish, undeveloped 'the mammy frog', and the disgusting smelly flax d*m is seen as beautiful, simply because the child does not understand the concept of ugliness. This lack of ugliness is not just seen in physical things, but the child cannot see ugliness in the nature of people. 'The early purges' can be taken simply at face value, in the nature of its sentiments. The poem only accounts Heaney's personal views on "prevention of cruelty' talk', and the experience that led him to hold these views as a child. 'Death of a naturalist' can, however, be seen as a poem with much more meaningful messages about human nature, and the action of growing up as a child. English Chloe Cangardel 5/3/2007 Page 1 of 1 ...read more.