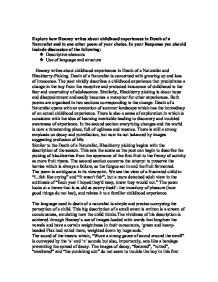 Explore how Heaney writes about childhood experiences in Death of a Naturalist and in one other poem of your choice. In your Response you should include discussion of the following:

We see the view of a frustrated child in "I...felt like crying" and "It wasn't fair", but a more detached adult view in the antithesis of "Each year I hoped they'd keep, knew they would not." The poem looks at a theme that is as old as poetry itself - the transitory of pleasure (how good things do not last), and relates it to a familiar childhood experience. The language used in death of a naturalist is simple and precise convyeing the perception of a child. This big description of a small event is written is a stream of conciousness, emulating how the child thinks.The vividness of his description is achieved through Heaney's use of images loaded with words that lengthen the vowels and have a certain weightiness in their consonants, 'green and heavy-headed Flax had rotted there, weighted down by huge sods.' ...read more.

There is also a hint that this picking is somehow violent - after the "blood" comes the claim that the collectors' hands were "sticky as Bluebeard's" The lusciousness of the fresh fruit contrasts with what it quickly becomes "fur" and "rat-grey fungus", as "lovely canfuls" smell "of rot". The poem is set out in iambic pentameter couplets with half rhyme. Like many of Heaney's poems it is full of monosyllabic nouns: "clot", "knot", "cans", "pots", "blobs", "p****s", "byre", "fur", "cache", "bush", "flesh" and "rot'. In section two everything changes. This change is marked by differences in tone, diction, imagery, movement and sound. The sounds are no longer delicate, but are "coarse", "bass" and "farting". "The slap and plop were obscene threats." The onomatopoeic "slap" and "plop" slow down the pace here and the full stop gives emphasis to the feeling of threat. The "warm thick slobber/Of frogspawn" has become "The great slime kings" and the transformation is further suggested by the threatening image of the frog as "mud grenades". ...read more.

The candidate's answer here is extremely well-augmented and very proficient in it's analysis. The candidate draws many comparisons between the poems, as well as recognising how each serve to represents the loss of innocence, or the loss of something worth ...

The candidate's answer here is extremely well-augmented and very proficient in it's analysis. The candidate draws many comparisons between the poems, as well as recognising how each serve to represents the loss of innocence, or the loss of something worth treasuring. The candidate expresses their ideas clearly, sharing the analysis between the two poems nicely as they identify themes, language devices, tones and structural features that contribute to the effect on the reader. There is a careful analysis of language, but less so on structure. This is not something to be disappointed by as there is relatively little to say about structure (that is not already mentioned), though some contextual appreciation wouldn't go amiss. What does Heaney's upbringing tell us about his attachment to nature? Why does nature feature so heavily in these two poems? In all his poems?

Just a few points to be added here and there - most of them simply need to be integrated into what it already a very good essay - and this could easily be a high grade A essay for A Level.

The Level of Analysis shown is very good, and the candidate delves to extensive depth s to consider the language and the tone of the piece. I like how they integrate structural analysis here, commenting on how the tone of the piece changes between the stanzas, and that the break in the middle represents a large gap in time for 'Death of a Naturalist', signalling the ended of innocence and the introduction of fear and paranoia and for 'Blackberry Picking' it represents a transition between the knowledge-hungry optimism of youth and maturation, maturation which features longing for said youth that has passed.

All in all, a very nicely-written essay, with a powerful understanding of the poems and a really engaging discourse to carry the analysis. I found myself eager to read what the candidate has to say due to their innovative use of powerful, interesting language in analysis, saving their essay from slipping by as just another of many essays on the same poems that examiners will have to mark. Using interesting and engaging language will help your essay stand out, and will help the examiner become more invested in it, making the marking more accurate.

The Quality of Written Communication is good. The candidate's use fo grammar, spelling and punctuation indicate someone whose literacy level is very high. They have a good understand of how to shape effective analysis with the discourse feeling clunky, and their use of technical terminology indicates proficiency and confidence in their analytical writing skills.