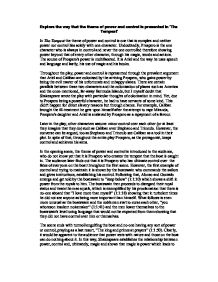 Explore the way that the theme of power and control is presented in 'The Tempest' In The Tempest the theme of power and control is one that is complex and neither power nor control lies solely with one character. Undoubtedly, Prospero is the one character who is always in control and never the one controlled therefore showing power beyond that of every other character, through his magic, words and actions. The source of Prospero's power is multifaceted. It is Ariel and the way he uses speech and language and lastly, his use of magic and his books. Throughout the play, power and control is represented through the prevalent argument that Ariel and Caliban are colonised by the arriving Prospero, who gains power by being the evil master of his unfortunate and unhappy slaves. There are certain parallels between these two characters and the colonisation of places such as America and the once-mentioned, far-away Bermuda Islands, but I myself doubt that Shakespeare wrote the play with particular thoughts of colonisation in mind. Yet, due to Prospero being a powerful character, he had to have servants of some kind. This didn't happen for direct slavery reasons but through chance. For example, Caliban brought the ill-treatment he gets upon himself after the attempt to rape Miranda, Prospero's daughter and Ariel is enslaved by Prospero as a repayment of a favour. Later in the play, other characters assume minor control over each other (or at least they imagine that they do) ...read more.

(4:1:48) of Prospero, to which he replies that he does "Dearly" (4:1:49). This shows that Ariel isn't bitter as Caliban is and is affectionate towards Prospero so that Prospero is not angered and may award Ariel freedom, showing a clear case of control through psychological manipulation by Ariel. To stop Ariel from rebelling, Prospero brings up an incident from the past where Ariel was trapped in a tree by the foul witch Sycorax, who "did confine thee" (1:2:274) and Prospero came to Ariel's rescue after "A dozen years" (1:2:279). Therefore, as much as Ariel is more powerful than Prospero in terms of magic, Prospero has this incident which Ariel owes him for and so uses this as a way to keep Ariel under his command. This psychological method of control, the guilt, is strengthened by the fact that Ariel would also be physically tortured "If thou murmur'st" (1:2:294) which overall makes this one of the most effective ways that Prospero uses to keep Ariel from disobeying. This master-slave relationship is the way that Prospero keeps track of and controls the other people on the island, sending Ariel to perform tasks on his behest, having to report back every finest detail. Without Ariel, it is difficult to imagine how Prospero could be as powerful which makes Ariel an extremely important tool for keeping a hold on other characters through magic. Caliban is a being that Prospero uses as his slave and, just as he does with Ariel, he refers to him as a "slave" (1:2:344) ...read more.

Interestingly, this is also another situation in which Ariel is the tool used to gain this control and he promises freedom "Within two days for this" (1:2:422). At the end of their encounter, Prospero does not want to make winning too easy, so makes Ferdinand work to have Miranda. In Act 3, Scene 1, Ferdinand is piling logs and Miranda enters, followed by Prospero "at a distance, unseen" (3:1:15-16, stage directions). Prospero likes to be in control and does so by watching over all the events on the island himself, or getting Ariel to do it and report back all the minute details which is why he is difficult to outwit. In the final scene, just as in the first one, Prospero is in full command of events. Prospero refers to all that has happened as his "project" (5:1:1) and shows that all of the events have, in one way or another, been his doing. The language shows that he feels that he has manipulated everyone to aid him in achieving his goals. What happens throughout, is that Prospero forgives each character and denounces his magic, freeing Ariel for being such an obedient and helpful spirit. He is also granted the dukedom of Milan back. I believe that Ariel has been freed and he has denounced his magic because he has obtained his goal of regaining the dukedom and so doesn't need magic or Ariel any more and he understands that Ariel has worked hard and performed well. The play concludes with Prospero having power and control through magic, which is the key way to achieve success as shown by Prospero with him being the one who receives everything that he had desired. ...read more.