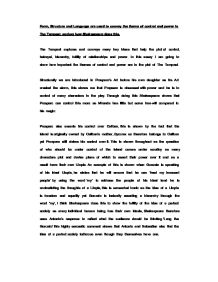 Form, Structure and Language are used to convey the theme of control and power in The Tempest, explore how Shakespeare does this.

Form, Structure and Language are used to convey the theme of control and power in The Tempest, explore how Shakespeare does this. The Tempest explores and conveys many key ideas that help the plot of control, betrayal, hierarchy, futility of relationships and power. In this essay I am going to show how important the themes of control and power are in the plot of The Tempest. Structurally we are introduced to Prospero's Art before his own daughter as his Art created the storm, this shows me that Propsero is obsessed with power and he is in control of many characters in the play. Through doing this Shakespeare shows that Prospero can control this more as Miranda has little but some free-will compared to his magic. Prospero also asserts his control over Caliban, this is shown by the fact that the island is originally owned by Caliban's mother, Sycorax so therefore belongs to Caliban yet Prospero still claims his control over it. This is shown throughout as the question of who should be under control of the island comes under scrutiny as many characters plot and devise plans of which to assert their power over it and as a result have their own Utopia. ...read more.

This is quite shocking as Prospero learnt his magic through books whereas Ariel's is more of a natural Art and could easily overpower Prospero as it was Ariel that 'put the wild waters in this roar' and Prospero simply told him to. Shakespeare is showing that Ariel's magic is more powerful but that comes down to nothing as Prospero is a more manipulative character so he remains to have the power over him. Propsero uses bribery to gain power and control over people as he says that if Ariel doesn't follow his orders he will 'rend an oak' if Ariel 'murmur'st' as he freed him to begin with from Sycrorax's curse or he will make sure that Caliban 'have cramps, side stitches that shall pen thy breath up' if he doesn't do whatever Prospero commands. I think Shakespeare does this to show that Prospero is all words, he learnt his magic out of a book full of words, and he doesn't have the power or the magic to actually do the things he says, and that's why he needs servants of both the Earth and the Air. In effect Prospero is the artist and Ariel and Caliban are the Art. Prospero also manipulates Miranda and Ferdinand's affections and feelings towards one another. ...read more.

In The Tempest, Prospero the colonizer usurps Caliban the 'slave' and I think this is showing both the opinions and feelings of Shakespeare and the people living during the Elizabethan times, as rich European men were uprooting Native Americans and controlling them in order to feel more powerful and fulfil their needs to feel strong and higher than others. The sympathetic light Caliban is cast in to me shows that Shakespeare disapproves of colonization and Utopia, as there is a close tie between both. Altogether, Shakespeare fully and contextually explores ideas of control and power portraying his thoughts and feelings throughout, the constant presence of these feelings draws conclusions to the viewer of the play as to problems occurring during the Elizabethan times when this play was written, by giving these opinions Shakespeare is allowing people to see him with the absence of his 'magic cloak' as this is his last play he is reserving many of his feelings till the end as he knows it's the last times he will be using his magic to put his audience under the spell of his creative 'Art'. I feel that the theme of control is a key and major theme throughout the play as Prospero manipulates every character in one way or another, and I feel that without this theme the play would not draw as many questions from the audience. 'Let your indulgence set me free' ...read more.