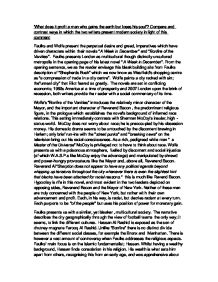 Faulks and Wolfe present the perpetual desire and greed, imperatives which have driven characters within their novels A Week in December and Bonfire of the Vanities.

'What does it profit a man who gains the earth but loses his soul'? Compare and contrast ways in which the two writers present modern society in light of this comment Faulks and Wolfe present the perpetual desire and greed, imperatives which have driven characters within their novels "A Week in December" and "Bonfire of the Vanities". Faulks presents London as multicultural though distinctly uncultured metropolis in the opening page of his latest novel "A Week in December". From the opening sentence, we as the reader envisage this bleak building site from Faulks description of "Shepherds Bush" which we now know as Westfield's shopping centre as "a compression of trade in a city centre". Wolfe paints a city racked with sin; the"unreal city" that Eliot feared so greatly. The novels are set in conflicting economic; 1980s America at a time of prosperity and 2007 London upon the brink of recession, both writers provide the reader with a social commentary of its time. Wolfe's "Bonfire of the Vanities" introduces the relatively minor character of the Mayor, and the important character of Reverend Bacon, the predominant religious figure, in the prologue which establishes the novel's background of inflamed race relations. ...read more.

The religion leads to him having a misconstrued idea of what is morally right. With his strong religious beliefs Hassan find it hard to accept the presentation of other religions; Christianity believing it "disgraceful" and how they seem to have "forgotten the true meaning of religion" however this further emphasises the importance of it within Hassan's life. Faulks presents Hassan as a "product of society." Arguably religion is the motivation for Jihad; however it is Hassan's extremist interpretation of religion, one fed to him by Salim that would lead to the immoral act he wishes to carry out. We can compare Hassan to his father Farooq, whilst they have the same religion, Farooq's outlook is merely positive unlike Hassan's. Not only is he "Strong in his devotions and pure in his behaviour' but believes his religion and "Spiritual belief is secure'. 'His faith enabled him to ride over financial turbulence and local hostility because he knew there was a truth that lay beyond cash flow and VAT'. Unlike Hassan Farooq's faith results in creating a character that is morally aware and stable. Hassan does manage to regain what is "morally correct" and his own identity. ...read more.

Tom Wolfe ruthlessly exposes the superficiality of 1980s culture. His criticism is not only confined to the very rich, the materialism of middle-class people is derided, too. Sebastian Faulks exposes the materialist obsessed nation with which greed and selfishness has taken over. Both authors provide a commentary upon modern society. The yearn for possession shadows societies morals and attitudes. Sherman McCoy's downfall comes from his infidelity to his wife; this could be seen as a catalyst. By the end of the novel he labels himself as "dead". Whilst making a realisation that he was the predecessor of his own fate he becomes aware that greed and the want for more caused his downfall. He gained nothing. Without a soul you merely exist. No emotions. This is similar to Veal's. His life is removed from the conscious state. Yet whilst having the immorality Sherman does, there is no downfall which comes from this. Veal's gets a "second chance" at life. Both Wolfe and Faulks have produced novels of their time. The reflection upon society that this is a superficial nation which has become fixated on materialism than morality is made evident. Whilst questioning the morality of religion among society and the effect of advancement in consumerism on our nation, both novels portray a society that has lost the true meaning of life. Word Count: 1929 ...read more.