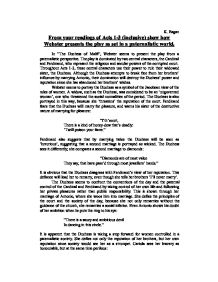 From your readings of Acts 1-3 (inclusive) show how Webster presents the play as set in a paternalistic world.

K. Eagan From your readings of Acts 1-3 (inclusive) show how Webster presents the play as set in a paternalistic world. In "The Duchess of Malfi", Webster seems to present the play from a paternalistic perspective. The play is dominated by two central characters, the Cardinal and Ferdinand, who represent the religious and secular powers of the corrupted court. Throughout Acts 1-3, these central characters use their power to ruin their widowed sister, the Duchess. Although the Duchess attempts to break free from her brothers' influence by marrying Antonio, their domination will destroy the Duchess' power and reputation since she has abandoned her brothers' wishes. Webster seems to portray the Duchess as a symbol of the Jacobean view of the roles of women. ...read more.

It is obvious that the Duchess disagrees with Ferdinand's view of her reputation. This defiance will lead her to remarry, even though she tells her brothers 'I'll never marry'. The Duchess seems to confront the conventions of the day and the paternal control of the Cardinal and Ferdinand by taking control of her own life and following her private pleasures rather than public responsibility. This is shown through her marriage of Antonio, where she woos him into marriage. She defies the principles of the court and the society of the day, because she not only remarries without the guidance of the church, she remarries a social inferior. Even Antonio shows his doubt of her ambition when he puts the ring to his eye: "There is a saucy and ambitious devil Is dancing in this circle." ...read more.

This is evident from the beginning of the play, as Antonio compares a Prince's court to a fountain. Although the fountain creates 'pure silver drops in general', it can still be corrupted: "Some curs'd example poison't near the head, Death and diseases through the whole land spread." The court of Malfi has been poisoned by the Cardinal and Ferdinand, who represent twin powers: religious and secular. Both of these characters seem to control not only the Duchess, but the other women in this play as well. Webster uses the fiery Ferdinand as the main adversary against the Duchess. He is portrayed as passionate and choleric, and he is zealous to preserve the family honour. This extreme passion for the family honour will destroy his confidence in his sister since she will challenge his position. ...read more.