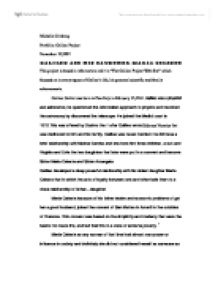 Galileo and his daughter Maria Celeste

Michelle Grinberg Portfolio: Galileo Project November 13,2002 GALILEO AND HIS DAUGTHER MARIA CELESTE This project is based in information red it in "The Galileo Project Web Site" which focused on in every aspect of Galileo's life, his personal scientific and family achievements. Galileo Galilei was born in Pisa Italy in February 15,1564. Galileo was a physicist and astronomer, he questioned the Aristotelian approach to physics and revolved the astronomy by discovered the telescope. He joined the Medici court in 1610.This was offered by Cosimo the II after Galileo wrote Sidereus Nuncius that was dedicated to him and his family. Galileo was never married. He did have a brief relationship with Marina Gamba and she bore him three children, a sun and Virginia and Livia the two daughters that later were put in a convent and become Sister Maria Celeste and Sister Arcangela. Galileo developed a deep powerful relationship with his oldest daughter Maria Celeste that in which the acts of loyalty between one and other lade them to a close relationship of father?daughter. ...read more.

to ask him for something she needs in this aspect we saw the normal relation in which daughters ask to her father for advices or material things. The fact that Maria Celeste never got married led Galileo to be the only man that she ever met, and because the verity that they were living in a patriarchal society Maria Celeste was totally and absolutely dependent of her father in every way in economic and affective perspectives. 2 Devotion is the principal aspect that we observed in Maria Celeste toward his father we see it just after three years of being in the San Matteo's convent she chose her religious name as" Maria Celeste"; Celeste means something related with the sky and stars. We can deduce that she choose this name because of her father work and theories to the sky. 5 In her letters we perceived a lot of acts of devotion from Maria Celeste to her father but we saw almost at the end of Galileo's life when he had to confront the inquisition, after the printing of his book, Dialogue Concerning the Two Chief World Systems, Galileo was ...read more.

She also is the friend in which both share secrets and anecdotes of theirs life the friend in which one can you relief yourself and your problems. Maria Celeste also was the daughter asking for her father's advices and depending on him in every sense.5 The relationship between Galileo's and her oldest daughter Maria Celeste cannot be described easily; this relationship was based on mutual confidence and loyalty. Galileo and her daughter developed a "special" relationship and I refer to special because this type of relationship was not common in that time, and still not common right now. This type of relationship has to be feed by acts of loyalty and honesty. 5 I admire Maria Celeste's sacrifice and concerned about her father, I think she was a smart exceptional woman capable of maintain a close relation with his father and capable to have interest to his fathers genius works. But especially I respect both of them for taking the father?daughter relation in to some think higher, into something deep that we last forever as an example. ...read more.