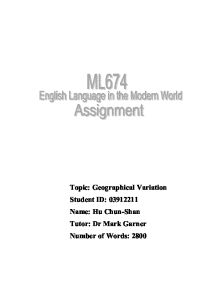 Topic: Geographical Variation Student ID: 03912211 Name: Hu Chun-Shan Tutor: Dr Mark Garner Number of Words: 2800 Geographical Variation of English Introduction As we know, English is the global language and due to this phenomenon it has changed a lot over time, such as historical variation, situational variation and geographical variation. Only a few centuries ago, the English language comprised a collection of dialects spoken in a small island by monolinguals (people who use only one language). Nowadays, it has varieties of distinction such as pidgins and creoles, "new Englishes", and a range of differing standard and non-standard varieties that are spoken in more than sixty different countries all over the world. As a matter of fact, most people tend to associate English with different English-speaking areas. But when they consider regional varieties of English, they also have to confront the issue of dialect. The difference between accent and dialect seems relatively simple to describe. For example, accent consists of pronunciation; dialect consists of grammar; words and their meanings, and pronunciation, but it is hard to define the boundaries. (Graddol et al., 1996) In this assignment, I will focus on the geographical variation of English. In the first chapter, I will describe Kachru's model of new Englishes, who has visualized the spread of English around the world as three concentric circles, and its five characteristics. In the second chapter, the background of English and the four main reasons of using English in Taiwan will be discussed. In the final part, I will explain the dialect of Taiwan English and discuss where it comes from, and my own experience of learning and using language. ...read more.

Furthermore, there are some TV programers to teach English that attract people of all ages from young children to the elderly. In addition to this, there is a diversity of English newspapers which are suitable for each different age and social group. (http://datas.ncl.edu.tw/theabs/1/) Finally, English is the language of trade and science. Many non-English speakers have sound English language skills to do business, to understand scientific publications and to communicate with people from all over the world. With Taiwan's entry into the WTO (World Trade Organization) the need to use English has increased at it is the primary language of the United States, the U.K., Australia, New Zealand and Canada. It is spoken by one out of every six people in the world, hence it has become the lingua franca of business and travel--essential for communication and survival when travelling around the world. (http://publish.gio.gov.tw/FCJ/past/02122071.html) As Taiwan is developing much closer relations with other countries after accessing to WTO, companies now requires employees who speak very fluent English to do overseas business. (http://datas.ncl.edu.tw/theabs/1/) Growing awareness of its worldwide significance has definitely pushed the English craze to even greater heights. Taiwan English It is hard to estimate how many dialects of English there are in the world. We have certainly heard of Indian English or 'Hinglish' and Singaporean English or 'Singlish'. But what about a place like Taiwan where English is not a major language, but an auxiliary language often used in education, business, and international communications? Could Taiwan be considered to have its own dialect of English like Taiwan English or Taiwanlish? Although there are variations in the way each person who is educated in Taiwan speaks English, there is a fairly consistent pattern of pronunciation which is heard. ...read more.

With the development of New English, more and more dialects of English have been investigated by academics. It is impossible to ignore this phenomenon. Why is the case particular with English? Due to the reasons of communication, trade and science, education and the relationship with U.S.A, Taiwan chose the English as a foreign language. With the development of language in Taiwan, many ways of using English have been developed which are not Standard English anymore. Because of this, Taiwan English has been studied more and more by linguists. As mentioned above, most Taiwanese have their own style of pronunciation, grammar and writing because of the particular pronunciation style of the previous English teacher who are usually from Taiwan. This phenomenon may be one of reasons causing the feature of Taiwan English. Whatever, the current Taiwan government suggests that English could become a second language in next decade. The question we must ask is what will Taiwan English be like. I believe that it will include new vocabulary, grammar, pronunciation but it thinks it is impossible to predict exactly what the changes will be. List of Reference Book Graddol et al. (1996)., English: history, diversity and change Routledge: London Web page Anon (2003)., The sounds and allophones of Taiwan English I [Website] Available at:http://ccms.ntu.edu.tw/~karchung/intro%20page%2027.htm[Accessed 2003, 20, November] Anon (2003)., The sounds and allophones of Taiwan English III [Website] Available at: http://ccms.ntu.edu.tw/~karchung/intro%20page%2029.htm[Accessed 2003, 20, November] Anon (2003)., The New Englishes[Website] Available at: http://courses.nus.edu.sg/course/elltankw/2262/NE.htm[Accessed 2003, 1, December] Liu Louise (2002)., Studying English a national obsession [Website] Available at: http://publish.gio.gov.tw/FCJ/past/02122071.html [Accessed 2003, 25, November] Tsai Ching-Yi (2002)., An observation of English Education through the Phenomenon of the Superior of English Foreign Teacher[Website] Available at: http://datas.ncl.edu.tw/theabs/1/ [Accessed 2003, 22, November] ?? ?? ?? ?? 1 ...read more.