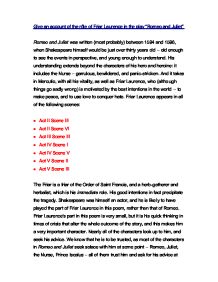 Give an account of the r�le of Friar Laurence in the play "Romeo and Juliet" Romeo and Juliet was written (most probably) between 1594 and 1596, when Shakespeare himself would be just over thirty years old - old enough to see the events in perspective, and young enough to understand. His understanding extends beyond the characters of his hero and heroine: it includes the Nurse - garrulous, bewildered, and panic-stricken. And it takes in Mercutio, with all his vitality, as well as Friar Laurence, who (although things go sadly wrong) is motivated by the best intentions in the world - to make peace, and to use love to conquer hate. Friar Laurence appears in all of the following scenes: * Act II Scene III * Act II Scene VI * Act III Scene III * Act IV Scene I * Act IV Scene V * Act V Scene II * Act V Scene III The Friar is a friar of the Order of Saint Francis, and a herb-gatherer and herbalist, which is his immediate role. His good intentions in fact precipitate the tragedy. Shakespeare was himself an actor, and he is likely to have played the part of Friar Laurence in this poem, rather than that of Romeo. ...read more.

Romeo has only been banished, not sentenced to death. Romeo's distress increases, and he is ready to kill himself. This is when Friar Laurence comes up with a plan to solve the dreadful problems that have arisen, and after another lecture to Romeo, he takes control of the situation. This lecture is much admired by the nurse. "O Lord, I could have stay'd here all the night To hear good counsel: O, what learning is. My lord, I'll tell my lady you will come." (Act III, Scene III, Lines 158-160) Act III Scene V Although the Friar does not actually appear in this scene, we can see his power and influence over Romeo. Romeo has obeyed the Friar, climbed the balcony to Juliet's bedroom, and consummated the marriage whose religious ceremony was performed on Monday afternoon. Without the physical consummation, the marriage would not have been complete; the vows would not be relevant - Romeo and Juliet would not have been man and wife. Act IV Scene I This is the scene in which the Friar and County Paris make the arrangements for the wedding. The Friar's r�le here is to offer advice to Juliet, and to tell her his plan to solve her present problem, which is the marriage to County Paris. ...read more.

points. The audience hopes that Juliet might wake up in time before Romeo takes his own life. This hope is in vain, of course. Romeo drinks his poison, whose action is swift. He dies kissing Juliet, a second before Friar Laurence, stumbling in the graveyard, enters the tomb to comfort Juliet in her waking moments. What if the Friar had got his letter to Romeo? What if he had got to the tomb in time to stop Romeo committing suicide? (All the bad things that happen in this poem happen because of a split-second lateness. This is probably because Shakespeare took this poem from Arthur Brooke's Romeus and Juliet. The original Romeus and Juliet was set over a time-span of nine months. Shakespeare condensed Brooke's narrative action into a mere five days, and this makes the story move much faster, and the events within it must be closer together in time.) At the end of Act V Scene III, the Friar provides the narrative, freely confessing his own part in the events, and offering himself for punishment. The County's Page and Balthasar fill in some missing details. Capulet and Montague join hands; the friar has (although he may not realise it) inadvertently accomplished his goal - the marriage has indeed united the families. Capulet and Montague have had to pay a high price for their new-found friendship though. Was it worth it? ...read more.