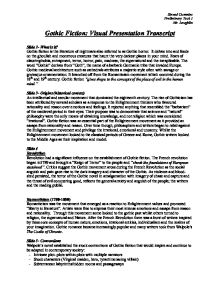 Gothic Fiction Speech. Gothic fiction is the literature of nightmare also referred to as Gothic horror. It delves into and feeds on the ghoulish and monstrous creatures that haunt the very darkest places in your mind.

Sinead Cummins Preliminary Task 1 Mr. Loughlin Gothic Fiction: Visual Presentation Transcript Slide 2- What is it? Gothic fiction is the literature of nightmare also referred to as Gothic horror. It delves into and feeds on the ghoulish and monstrous creatures that haunt the very darkest places in your mind. Fears of claustrophobia, entrapment, terror, horror, pain, madness, the supernatural and the inexplicable. The word "Gothic" derives from "Goth", the name of a barbaric Germanic tribe that invaded Europe. Gothic medieval architecture such as cathedrals attributes a majestic style often with savage or grotesque ornamentation. It branched off from the Romanticism movement which occurred during the 18th and 19th century. Gothic fiction "gives shape to the concepts of the place of evil in the human mind." Slide 3- Origins (historical context) An intellectual and secular movement that dominated the eighteenth century. The rise of Gothicism has been attributed by several scholars as a response to the Enlightenment thinkers who favoured rationality and reason over emotions and feelings. It rejected anything that resembled the "barbarism" of the medieval period in their eyes. Their purpose was to demonstrate that science and "natural" philosophy were the only means of obtaining knowledge, and not religion which was considered "irrational". Gothic fiction was an essential part of the Enlightenment movement as it provided an escape from rationality and reason. Over time though, philosophers and writers began to rebel against the Enlightenment movement and privilege the irrational, emotional and uncanny. ...read more.

The twentieth century significantly contributed to the genre with the introduction of film. During the 1920s and 30s movies were based around Dracula, Frankenstein and werewolves then later films began to draw on Poe's works. The twentieth and twenty-first centuries maintained an ongoing fascination with horror, terror, the supernatural vampires and werewolves demonstrating the ongoing power of the Gothic in contemporary society. Slide 8-Psycho Contextual Placement The beginning of the twentieth century saw the renewed popularity of the horror tale and it is supposed that it was a way of expressing the horrors of World War I. There were numerous variations of Gothic fiction established in this time. Successful mass Gothic novels, often called Modern Gothic or Gothic Romance were written for females, by females like Daphne Du Maurier's Rebecca (1993 considered the archetypal Modern Gothic thriller. The 60s, when Psycho was released was an era of great positive change for the role and rights of women. It was a time of s****l revolution which was exploited in the media especially film. Hitchcock broke all film conventions featuring the "leading female protagonist having a lunchtime affair in her sexy white undergarments in the first scene". This was significant because before the 60s female sexuality was repressed. In relation to Gothic fiction, the Gothic genre gave way to modern horror fiction. Slide 9- Psycho Conventions Psycho employs several stock gothic conventions including: An Isolated/remote setting with the motel off the side of a large motorway, separated from the outside world. ...read more.

Punter effectively states the particularities of twentieth century gothic fiction: "Contemporary gothic reflects and provides a singular symbolic language for the discussion of preoccupations of our time: capitalism, inhumanity, information overload, child abuse, serial murder, pollution, and corruption". Child and domestic violence, serial murder and corruption are clearly evident Slide 16- Shining Conventions The Shining exhibits traditional Gothic conventions as well as modern adaptations of the genre. The huge old vacant hotel that ends up being haunted hides a dark past of brutal murder. There are numerous supernatural events involving the ghosts of the previous family, Danny's visions of their murder and the chases through the hallways. The double or the "doppleganger" seen at the end of the film presents a photo shown of a ball in 1921 with Jack standing in the middle of the gathering suggesting that Jack could be a reincarnation of himself and lives out the horrific events of the past once more. This also ties in the convention of The theme of appearance and reality is prevalent in the film, Gothic fiction exploring this murky ground between what is "real" and "fantasy". This is what descends Jack into madness. Eee/ Gothic fiction has undergone significant transformation as seen and continues to significantly influence contemporary literature. Even though many conventions have been refined, adapted or created the core values and character of Gothic have provided society with an outlet into the dark world of decay, death and mystery leading you on a "road to that sublime place in the mind composed of fear and beauty." ...read more.