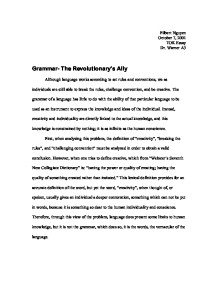 Filbert Nguyen October 7, 2001 TOK Essay Dr. Warner A3 Grammar- The Revolutionary's Ally Although language works according to set rules and conventions, we as individuals are still able to break the rules, challenge convention, and be creative. The grammar of a language has little to do with the ability of that particular language to be used as an instrument to express the knowledge and ideas of the individual. Instead, creativity and individuality are directly linked to the actual knowledge, and this knowledge is constrained by nothing; it is as infinite as the human conscience. First, when analyzing this problem, the definition of "creativity", "breaking the rules", and "challenging convention" must be analyzed in order to obtain a valid conclusion. However, when one tries to define creative, which from "Webster's Seventh New Collegiate Dictionary" is: "having the power or quality of creating; having the quality of something created rather than imitated." This lexical definition provides for an accurate definition of the word, but yet the word, "creativity", when thought of, or spoken, usually gives an individual a deeper connotation, something which can not be put in words, because it is something so dear to the human individuality and conscience. ...read more.

Although art has been the chosen method of expression of many famous artists such as Picasso, De Vinci, and the few modern contemporaries, one is able to argue that without the critiques of the "experts" the understanding of this creativity would be lost; thereby reducing the impact of the individualistic idea or convention revolution intended by the artist. For these reasons, language has been the primary form of creative expression through the ages. The examples of language being used as the instrument of expression of creativity are numerous. In literature, the creativity can be classified as a new "era" or "genre" of writing. A good example of this transition is that when the authors began to write literature pertaining to other topics besides the Bible. Prior to this transition, all texts were religious texts, especially during the Medieval Periods. Thus, this example is also one that shows the language being used to break convention- the convention of religion in literature. Clearly, grammar had little or no constraints on the authors who wrote literature not of the biblical references. However, the primary example of grammar being the least fraction of constraining creativity in language is collective literature. ...read more.

Now, an identification of who this "one" might be must be concluded. And that obviously can only be the writer of this essay. Thus, the statement of: "I felt, in writing this essay, that there were no restraints in my expression of such topics as 'creativity' and 'challenge of convention'," can be made. From this further evaluation of the "constraints," the supporting logic strengthens the argument that the set rules of grammar do not limit the expression of creativity in language. In this paper, the problem of whether grammar limits or constrains the individual to break the rules, challenge convention, and to be creative was resolved to conclude that grammar does not create any problematic situations where an idea or thought of any theme is blocked, censored, or muted. Grammar is the foundation of language; it is, instead, the structure, which allows the individual to create and successfully express such creative thoughts, such thoughts, which have led to the many revolutions in our human society. To further conclude, one is able to look back to history for answers, and thus, from human experience, language and grammar has shown itself to be the revolutionary's most common ally- not its censor. ...read more.