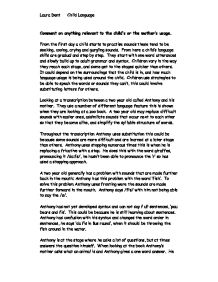 Comment on anything relevant to the child&amp;#146;s or the mother&amp;#146;s usage.

Comment on anything relevant to the child's or the mother's usage. From the first day a child starts to practise sounds these tend to be seeking, cooing, crying and gurgling sounds. From here a child's language skills are gradual and step by step. They start with one word utterances and slowly build up to adult grammar and syntax. Children vary in the way they reach each stage, and some get to the stages quicker than others. It could depend on the surroundings that the child is in, and how much language usage is being used around the child. Children use strategies to be able to speak the words or sounds they can't, this could involve substituting letters for others. ...read more.

A two year old generally has a problem with sounds that are made further back in the mouth; Anthony has this problem with the word 'fish'. To solve this problem Anthony uses fronting were the sounds are made further forward in the mouth. Anthony says /fis/ with him not being able to say the /s/. Anthony has not yet developed syntax and can not say full sentences, 'pau bears and fis'. This could be because he is still learning about sentences. Anthony has confusion with his syntax and changes the word order in sentences, he says 'da fis in �us raund', when it should be throwing the fish around in the water. ...read more.

Anthony's mother asks a number of questions this way she knows she will get a response, but there is a time when she doesn't get a reply. She pauses to wait for the child to speak but doesn't get an answer so carries on talking, 'fish don't you (.) they like fish (.)'. Anthony's mother corrects his utterances by expanding on his sentence and giving the correct version. When Anthony says 'wan to / / on that one', mother says 'you want to ride'. In the conversation Anthony changes the subject to transport, the main use of vocabulary the child uses is on animals and transport. Anthony uses a range of language features to have a conversation with his mother; if he can't pronounce a word or sound then he uses another. ?? ?? ?? ?? Laura Dent Child Language ...read more.