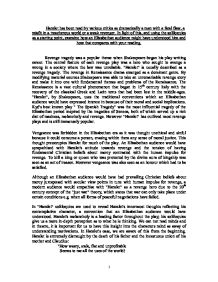 Hamlet has been read by various critics as dramatically a man with a fatal flaw, a misfit in a treacherous world or a weak revenger - In light of this, and using the soliloquies as a starting point,examine how an Elizabethan audience might have understood

Hamlet has been read by various critics as dramatically a man with a fatal flaw, a misfit in a treacherous world or a weak revenger. In light of this, and using the soliloquies as a starting point, examine how an Elizabethan audience might have understood him and how that compares with your reading. Revenge tragedy was a popular theme when Shakespeare began his play writing career. The central feature of each revenge play was a hero who sought to avenge a wrong in a society where the law was unreliable. "Hamlet" is usually described as a revenge tragedy. The revenge in Renaissance drama emerged as a dominant genre. By modifying material sources Shakespeare was able to take an unremarkable revenge story and make it into one with fundamental themes and problems of the Renaissance. The Renaissance is a vast cultural phenomenon that began in 15th century Italy with the recovery of the classical Greek and Latin texts that had been lost in the middle-ages. "Hamlet", by Shakespeare, uses the traditional conventions which an Elizabethan audience would have expressed interest in because of their moral and social implications. Kyd's best known play " The Spanish Tragedy" was the most influential tragedy of the Elizabethan period inspired by the tragedies of Seneca, both of which served up a rich diet of madness, melancholy and revenge. ...read more.

In addition to revealing Hamlet's plot to catch the king in his guilt, Hamlet's second soliloquy uncovers the essence of Hamlet's true conflict. Hamlet is committed to seeking revenge for his father, yet he cannot act due to his revulsion towards extracting the cold and calculating revenge. Determined to convince himself to carry out the premeditated murder of his uncle, Hamlet works himself into a frenzy. He hopes that his passions will halt his better judgment and he will then be able to kill Claudius without hesitation. But Hamlet fails to quell his apprehensions and can not act immediately. The traditional revenge hero would be seen, by an Elizabethan audience, as one who sought to avenge a wrong in an unjust society. Hamlet reflects the Elizabethan views of revenge with his determined heart during the second soliloquy. The soliloquy leaves the reader feeling that Hamlet will keep his word and that revenge will certainly follow in the flowing act. However, Hamlet's determination begins to deteriorate as the play progresses suggesting Hamlet's ambivalence of avenging his father's death, through phrases such as "o cursed spite that even I was born to set things right" From this point onwards Hamlet fails to carry out the avenger's role, which would have defied an Elizabethan audience's tradition. ...read more.

He only thinks about his consequences after he has performed. This is evident at the end of the play when he asks for Hamlet's forgiveness when he says "I am justly killed with mine own treachery". He is too willing to believe the king's version of events, thus Claudius uses Laertes anger for his own benefit. Laertes only wants revenge and is not concerned with punishment. Shakespeare makes these contrasts to highlight Hamlet as a stereotypical "weak avenger", but an infinitely more interesting and complex character consumed by the moral complications of revenge, which reveal him as a hero blesses or cursed by the power of individual thought as opposed to a hero who follows unthinkingly the revenge tradition. An Elizabethan audience would see "Hamlet" as a weak avenger with a "fatal flaw" and a propensity to think too much, therefore not keeping within the dramatic conventions, which would have been greatly appreciated by an Elizabethan audience. However, a modern audience may sympathise greatly with Hamlet's inability to abandon or fulfill his role because making an epic decision is rarely straightforward. It seems that Shakespeare wants to present Hamlet as a tortured soul, influenced by Christian beliefs. The dilemma "Hamlet" faces is in some ways the dilemma faced by civilized man at large, William Hazlitt supports this view by stating that "Hamlet is one of those plays that we think the most about because it reflects on human life"�. ...read more.