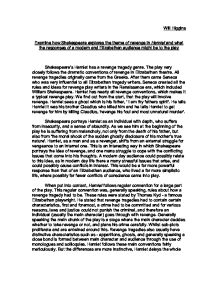 Examine how Shakespeare explores the theme of revenge in Hamlet and what the responses of a modern and Elizabethan audience might be to the play.

Will Higgins Examine how Shakespeare explores the theme of revenge in Hamlet and what the responses of a modern and Elizabethan audience might be to the play Shakespeare's Hamlet has a revenge tragedy genre. The play very closely follows the dramatic conventions of revenge in Elizabethan theatre. All revenge tragedies originally came from the Greeks. After them came Seneca who was very influential to all Elizabethan tragedy writers. Seneca created all the rules and ideas for revenge play writers in the Renaissance era, which included William Shakespeare. Hamlet has nearly all revenge conventions, which makes it a typical revenge play. We find out from the start, that the play will involve revenge. Hamlet sees a ghost which is his father, ' I am thy fathers spirit'. He tells Hamlet it was his brother Claudius who killed him and he tells Hamlet to get revenge for him by killing Claudius, 'revenge his foul and most unnatural murder'. Shakespeare portrays Hamlet as an individual with depth, who suffers from insecurity, and a sense of absurdity. As we see him at the beginning of the play he is suffering from melancholy, not only from the death of his father, but also from 'the moral shock of the sudden ghostly disclosure of his mother's true nature'. ...read more.

They would be more shocked by this than an Elizabethan audience. An Elizabethan audience response would also be very different because of Church, State and the regular morals of the people in that age did not accept revenge. People would not accept revenge under any circumstances no matter what the original crime was. They believed that someone who takes revenge into their own hands like Hamlet did was going against the total political authority of the state. The Elizabethan people did simply not accept revenge they thought of it as a sin and it was utterly condemned. However the people liked to see it in plays. Hamlet could agree with the Elizabethan audience because of all the other things that go wrong in the play due to Hamlet trying to get revenge. Hamlet doing wrong eventually leads to his own downfall. There were three major families in the Tragedy of Hamlet. These were the family of King Fortinbras, the family of Polonius, and the family of King Hamlet. The heads of each of these families are all slaughtered within the play. In the time in which this play is set, avenging the murder of a father was part of one's honour, and was a duty which had to be carried out. ...read more.

However, an audience of modern times, where religion has maybe taken a back seat in the modern society, would probably have had a different approach to revenge. Unlike in the Elizabethan period, where the classical revenge attitude was completely opposed to, individuals might see this as the best way for dealing with revenge. With this in mind, the responses of the two audiences have the potential to be on opposite ends of the scale. One disagreeing with the act of revenge (Elizabethan audience), the other (the modern day alternative) would contain a mixture of agreement and disagreement towards revenge. In conclusion, revenge was the driving force behind Hamlet's actions, it eventually led to the downfall of the main character, which leads us to question whether Shakespeare was giving a message about revenge and its consequences, and condemning it in Elizabethan society. However, in the diverse society that we live in today, there are many views on a number of things. Therefore the response of a modern day audience would be more varied as people now have had their views expanded on Hamlet and the topic of revenge. Many scholars and critics have written about the idea of revenge in the play, this would influence people's views on the subject, along with their own moral standpoints. ...read more.