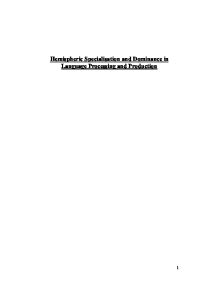 Hemispheric Specialisation and Dominance in Language Processing and Production

Hemispheric Specialisation and Dominance in Language Processing and Production Abstract This experiment investigated hemispheric specialisation and dominance with regards to language functions. It used a computer program to measure the amount of key presses achieved by participants in a given time across four different trials (1 with the left hand, no talking, 2 with the left hand whilst being asked questions, and the same two trials again with the right hand). The participants were 2nd year psychology students from which a cohort of 20 was selected for data analysis. A significant difference was found for the effect of hemisphere and language processing task present or absent. However, the means for each trial did not support left hemispheric dominance for language functions: more key presses were recorded when talking and using the right hand than when talking and using the left. Handedness and some involvement of the right hemisphere in language processing and production were also shown as appearing to influence the results obtained. The main conclusion to be drawn is that hemispheric specialisation and language dominance is a subject that needs further investigation in order to clarify the generalisability of conclusions made about left hemisphere language specialisations. Our brain consists of two halves; the left hemisphere and the right hemisphere. The left hemisphere receives information from and controls muscles in the right side of the body, whilst the right hemisphere receives information from and controls muscles in the left side of the body. Research using brain imagery and studies of brain damaged and split brain patients, to name just a few examples, has shown that some of our functions are controlled more by one hemisphere than the other, i.e. ...read more.

A computer keyboard was used as a response device. Procedure Participants were seated in front of a computer screen, asked to fill in an informed consent form and provided with standardised instructions as to how to carry out the task (See Appendix 5). Each participant was instructed to make as many key presses on the keyboard as they could within 30 seconds. First participants were given two practice trials, and then four experimental trials. In the experimental trials they were required to tap with a finger from their right hand and then with a finger from their left hand. In the two other trials they were required to tap with their right hand and then their left hand at the same time as answering some simple questions. The number of key presses made during each of the trials was recorded by the computer program. The experiment took no longer than five minutes, and following the experiment participants were provided with a debriefing form (see Appendix 4) telling them of the main objectives of the study. Results Descriptive Statistics Figure 1 below shows that the mean numbers of key presses differ for each hand when language is or isn't being processed: thus supporting our hypothesis. The mean number of taps recorded decreased for both hands when talking during the task. However, it can also be seen that the mean number of key presses recorded with the left hand when talking (165) are less than those recorded with the right hand when talking (179.6), this does not support the hypothesis of left hemisphere language dominance. ...read more.

Another possible issue is the design, using the same participants across the conditions did control for the effects of individual differences but not practice effects and order effects which may have played a role. The final two trials were the most important ones in the task and it is possible that by this time participants had become bored or tired. To avoid these problems in any future study, trials could be shorter or have longer breaks and the order of conditions counterbalanced across the participants. Another question involving the procedure is whether key presses and simple questions are an accurate measurement of such a complex thing as hemispheric specialisation? As the Eta Squared test shows, the results cannot be deemed important in a practical setting and thus provide no real implications for the real world. To improve this future research could repeat the study using a more representative population and possibly remove the variable of handedness i.e. have equal amounts of left and right handers, or find a way of measuring its affect. In conclusion this study showed that participants made significantly different numbers of key presses across the four levels of the independent variable, supporting the experimental hypothesis. However, the means do not support the more specific idea of left hemisphere dominance for language (more key presses were recorded for the right hand with talking than the left). This does not mean that all theories should be overturned as much research does support this theory; moreover it suggests that further research needs to be carried out, particularly with 'normal' participants, in order for us to understand how general hemispheric specialisation patterns concerning language are. ...read more.