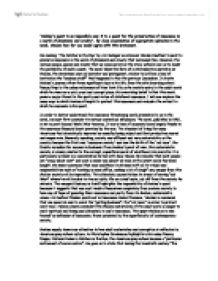 'Holden's quest is an impossible one; it is a quest for the preservation of innocence in a world of phoniness and cruelty'. By close examination of appropriate episodes in the novel, discuss how far you would agree with this statement.

'Holden's quest is an impossible one; it is a quest for the preservation of innocence in a world of phoniness and cruelty'. By close examination of appropriate episodes in the novel, discuss how far you would agree with this statement. On reading 'The Catcher in the Rye' by J.D Salinger we discover Holden Caulfield's quest to preserve innocence in the world of phoniness and cruelty that surrounds him. However, the various people, places and events that we come across as the story unfolds lead us to doubt the possibility of such a quest. The novel takes the form of a retrospective narrative as Holden, the seventeen year old narrator and protagonist, relates to us from a kind of institution the "madman stuff" that happened to him the previous December. It charts Holden's journey other three significant days in his life, from the elite boarding school Pencey Prep to the urban wilderness of New York City as he resists entry to the adult world which he views as a cold, cruel and corrupt place. His overriding belief is that this world poses a major threat to the purity and virtue of childhood innocence. I will now explore the many ways in which Holden attempts to protect this innocence and evaluate the extent to which he succeeds in his quest. In order to better understand the innocence-threatening world presented to us in the novel, we must first consider its various contextual influences. The novel, published in 1951, is set in post-Second World War America. It was a time of economic boom largely thanks to the enormous financial boost provided by the war. The standard of living for many Americans had dramatically improved as manufacturing output and food production soared and wages rose. Generally speaking, society was affluent and very materialistic as the country became the first real 'consumer society' and saw the birth of the 'rat race', the frantic scramble for success in business. ...read more.

Holden's revulsion on both these occasions suggests that he fears the physical decline and vulnerability associated with ageing, a cruel process that innocent youth cannot avoid. Holden is also painfully reminded of the fragility of life by the death of his younger brother Allie. He is haunted by the thought of his brother in a rainy cemetery surrounded by "dead guys and tombstones". He was also disturbed by the death of James Castle, an innocent boy he knew at Elkton Hills who committed suicide jumping out the window rather than bear the "repulsive things" that his bullies were doing to him. The injustice of Castle's death and the more devastating loss of Allie leave no doubt in Holden's mind of how precious innocence is and spur him on to defend it. These personal experiences of the cruelty of the world have resulted in Holden's increased resistance to change. He wishes that everything could stay as it is, that time could stand still. This can be seen in his thoughts regarding the Museum of Natural History, a place of preservation: "The best thing, though, in that museum was that everything always stayed the way it was". Holden would like life to be like the Eskimos and Indians in the museum: silent, unchanging and predictable. He believes that you ought "to be able to stick" some things in "one of those big cases and just leave them alone". However, the adult world is much more prone to change than the museum displays. Change is an intrinsic part of life. It is a basic fact of life that everyone grows up, grows old and dies at some point. The implication of all this is that Holden's dream of saving children from adulthood, from losing their innocence is unfeasible. Holden's desire to preserve childhood innocence is reinforced by the fact that there are no admirable, supportive adult figures in his own life. ...read more.

The thing with kids is, if they want to grab for the gold ring, you have to let them do it, and not say anything. If they fall off, they fall off, but it's bad if you say anything to them." Holden comes to the understanding that children should be allowed to take their own risks, to make their own mistakes. This is a step forward for Holden who up until this point has considered himself protector of innocence, someone who must safeguard children from the adult world. He now seems ready to surrender to the inevitability of adulthood. In conclusion, it is evident that Holden struggles throughout the novel to come to terms with adult society in view of the phoniness, cruelty, sordidness and hypocrisy that he associates with it. Whether it be among the "hot-shots" of elite boarding schools or on the streets of Manhattan he continually encounters threats to innocence, to the purity and integrity of childhood. There is a clear divide between the sweet world of childhood innocence where Holden wishes to stay and the cruel world of adulthood where he is afraid to go. But society and his own body is telling him that it is time for him to become part of this world. At the end of novel it seems that at last Holden's 'uncompromising sense of innocence' has finally collapsed 'under the thumb of the world's pressure'(Pinsker). He comes to understand that maturation into adulthood and subsequent loss of childhood innocence is a natural, necessary process. Speaking to us from the California institution, Holden denies that anyone knows "what you're going to do till you do it", allowing us to suppose that uncertainty about the future, including what will become of childhood innocence, is no longer something that frightens or disturbs Holden. After his three day journey of self-discovery, Holden has acknowledged that his quest to preserve innocence is an unobtainable dream. ...read more.

This is an excellent essay that has a strong understanding of technical vocabulary and alternative interpretations, but could improve its analysis of context. The student makes excellent use of quotes from critics, such as " Holden's 'uncompromising sense of ...

This is an excellent essay that has a strong understanding of technical vocabulary and alternative interpretations, but could improve its analysis of context. The student makes excellent use of quotes from critics, such as " Holden's 'uncompromising sense of innocence' has finally collapsed 'under the thumb of the world's pressure'(Pinsker) ". This is very good because it shows that the student can not only present alternative interpretations, but they have read broadly enough around the subject to find specific critics for The Catcher in the Rye, and that they have the skill to understand what are largely degree-level critical quotes. When analysing, the student also uses words such as "could" - "Holden could be regarded as a heroic figure..." - and "possibly" - "...possibly by becoming sexually mature", which are good to use because they show that the student understands that there is more than one interpretation of a text and is not treating their idea as the only, correct one.

The technical vocabulary used in this essay, such as "retrospective narrative", is very good as it proves that the student has a good understanding of the techniques used by authors to craft their texts, rather than a vague or weak idea. The student uses excellent evidence from the text, such as " ...who he describes as "so pretty and smart" ". This is good because it shows that the student can back up their analysis with evidence directly from Salinger's writing, and are not just making stabs in the dark that they can't prove. The conclusion to the essay is excellent because it answers the question - " Holden struggles throughout the novel to come to terms with adult society" while summarising what has already been argued, which shows the student can reassess what they have written and reach a judgement out of it.

The student is right to refer to the context of the novel - "It was a time of economic boom..." - because it shows that they understand the influences on the text. However, the student could improve by talking about the text first, and then context in relation to that. In the second paragraph, this student talks about context first and doesn't relate it to the text until half way through, which leaves the examiner questioning the relevance of the contextual information. It would be better to start with analysis of Holden's outlook on the materialistic world and then go into the context of economic boom, as it would then be relevant. It would also be better to refer to context every now and then during the essay to show a sustained understanding: this student hardly refers to it beyond the third paragraph, and it appears as though it has been stuck on to the start. Currently, this essay is arguably a 5* essay essay: if it was to make this improvement, it would be a definite 5*.

The spelling, grammar and punctuation in this essay is excellent, if not perfect, and this is good as it means that the examiner can spend their time rewarding the student for their excellent analysis rather than trying to understand what they mean. This is a reason to always leave time to proofread work before submission/end of the exam. The student also avoids using the word "I" (unless in a quote) or phrases like "I think that Holden is...", which is good because using "I" makes the essay sound informal and undermines the idea that you are looking for several interpretations other than your own.