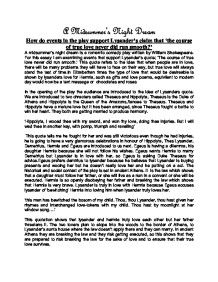 How do events in the play support Lysander's claim that 'the course of true love never did run smooth?'

A Midsummer's Night Dream How do events in the play support Lysander's claim that 'the course of true love never did run smooth?' A midsummer's night dream is a romantic comedy play written by William Shakespeare. For this essay I am examining events that support Lysander's quote; 'The course of true love never did run smooth.' This quote refers to the idea that when people are in love, there will be many problems they will have to face on their way, but true love will always stand the test of time.In Elizabethan times the type of love that would be desireable is shown by lysanders love for Hermia, such as gifts and love poems, equivilent to modern day would now be a text message or chocolates and roses In the opening of the play the audience are introduced to the idea of Lysanders quote. We are introduced to two chracters called Theseus and hippolyta, Theseus is the Duke of Athens and Hippolyta is the Queen of the Amazons,fiancee to Theseus. Theseus and Hippolyta have a mature love but it has been arranged, since Theseus fought a battle to win her heart. ...read more.

Helena's perception of true love is that woman should be wooed and doted upon and it is not usual for women to fight for love, 'we cannot fight for love, as men do; we should be wooed, not made to woo..' This quotation shows that Helena is sad because she is forced to be acting like how women shouldn't. her behaviour contradicts the traditional view of womens behaviour at the time, this shows that love can make people can change people and make them do unexpected things. Though Helena does foolish and desperate things for love, it shows what kind of actions people can do to win love. Oberon and Titania Are both king and queen of faries and they live in the woods. They both have true love but they are jealous of each other. Their dilemma is that titania is taking care of a Indian boy and Oberon wants to have him for a servant and because Titania refuses to give the boy over to Oberon their love is not running smooth. The Elizabethan audience would view Titania as a quite disobedient but brave woman for not giving to her husbands demands. ...read more.

The lovers marry alongside Theseus and Hippolyta. Helena has got her lover back but it is a bit of a illusion because Demetrius is under the love potion, thou it could also be that after all the events Demetrius sees sense and realises his wrong. The audience might view this and be happy that the play ended this way, with Helena and Demetrius happily married and in love. The audience may also feel a tinge of sympathy for Helena as well because if Demetrius is under a spell, it may be reversed and Demetrius may leave her again. Whilst examining and reading this play I have realised that the events do support lysander's quote. The lovers go through many problems . Shakespeare wrote his plays centuries ago and the themes still apply to modern day. The message in this play to the audience is to make us apprieciate how difficult true love can run smooth, by placing the characters in testing and difficult situations but also to show the happiness when difficulties are overcome, such as the celebrations and wedding. A midsummer's night Dream has taught me that true love is the most strongest emotion of all and it can make people do anything to make sure this love survives. ?? ?? ?? ?? ...read more.