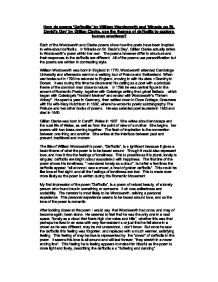 How do poems 'Daffodils' by William Wordsworth and 'Miracle on St. David's Day' by Gillian Clarke, use the themes of daffodils to explore human emotions?

How do poems 'Daffodils' by William Wordsworth and 'Miracle on St. David's Day' by Gillian Clarke, use the themes of daffodils to explore human emotions? Each of the Wordsworth and Clarke poems show how the poets have been inspired to write about daffodils. In 'Miracle on St. David's Day', Gillian Clarke actually refers to Wordsworth's poem within her own. The poems however differ in structure and their responses to the daffodils are different. All of the poems use personification but the poems are written in contrasting style. William Wordsworth was born in England in 1770, Wordsworth attended Cambridge University and afterwards went on a walking tour of France and Switzerland. When war broke out in 1793 he returned to England, moving in with his sister Dorothy in Dorset. It was during this time he discovered his calling as a poet with a principal theme of the common man close to nature. In 1798 he was central figure in the advent of Romantic Poetry, together with Coleridge writing the Lyrical Ballads, which began with Coleridge's "Ancient Mariner" and ended with Wordsworth's "Tintern Abbey". He spent a year in Germany, then settled down in Dove Cottage, Grasmere with his wife Mary Hutchison in 1802, where he wrote his poetic autobiography The Prelude and two other books of poems. He was selected poet laureate in 1843 and died in 1850. Gillian Clarke was born in Cardiff, Wales in 1937. She writes about landscape and the rural life of Wales, as well as from the point of view of a mother. She begins her poems with two ideas coming together. The flash of inspiration is the connection between one thing and another. ...read more.

To one of sorrow that there are such a range of different people who have been branded insane at this home. Yet it is also one of amazement and surprise, that a man that has not spoken for years is able to speak, as if it was a "miracle". I then looked closer at the poem. In the first stanza of the poem Gillian Clarke describes the country house in what seems to be an idyllic setting, "the sun treads the path among cedars and enormous oaks. It might be a country house, guests strolling". Despite the conversational tone suggesting normality her use of the word 'might' alerts the reader. The illusion is swept away by the opening line of the second stanza, "I am reading poetry to the insane". The finality of the end stopping line and the matter of the fact tone, shocks the reader. The contrast between the descriptive lines of the opening stanza and the flat tone of this line introduce the reader to the contrast between the setting and the 'guests'. It is as if the first verse is trying to mask the true poem. However, Gillian Clarke is known for beginning her poems with two contrasting ideas. The "I" suggests the experience is personal, which when I research I found it was. Clarke had gone to an insanity home to try and put some hope, and perhaps brighten up their lives. This shows a mother like figure coming through, in the wanting to help and loo after others. In the second stanza the first two of the patients at the mental hospital are introduced. ...read more.

When the miracle occurs the daffodils are "still as wax", this makes the 'dumb' man reciting the poem stand out more, as if even nature is listening, but one can almost imagine the man standing still, only his mouth moving while reciting the words. At the end the daffodils "are flame", they come alive as the man now again has. The daffodils could be like a candle, they are "still as wax", but the man's voice is the strike to light them, where they then "are flame". In Gillian Clarke's poem they could almost represent the labourer/man, rather than the emotions. William Wordsworth uses daffodils in his poems mainly to show the emotion of love. It can also show friendliness, happiness and unawareness. I think it shows unawareness as the daffodils are a "jocund company" as they are "dancing in the breeze", yet "little thought is given". Daffodils can easily be stood on, squashed and killed, and this may of happened to his love which the daffodils most likely represent, it was squashed and killed as he had not appreciated what he had by thinking nothing of it. The daffodils then become a memory, and although he looks back on the past, the past linked with the daffodils - nature, blissfully he may also look back with regret, as he may seem in "bliss of solitude" but something is now missing, so the daffodils could represent regret and possibly misery. Yet at the same time the first thoughts of love and happiness, as these are remembered in the memory, the regret is the after thought of the memory. ...read more.